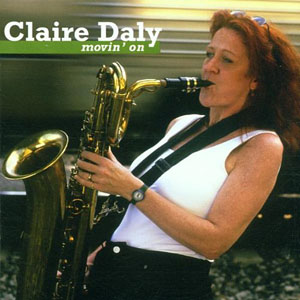 Baritone saxophonist Claire Daly's second album focuses on songs that deal with dire events leading to the loss of persons held dear. Just before she recorded this CD, she lost her mother and nephew. One of her icons, Gerry Mulligan, had also recently passed away. Tommy Turrentine's "You Said It" is included as a tribute to his brother Stanley whose death prevented his anticipated appearance on this album. So there is a dark cloud hanging over this session. But there are some happy moments as well. The album marks the debut of Claire Daly as a vocalist and one wonders why she waited so long to share her singing endowment with the public. She comes across very well on a poignant somewhat resigned "Some Other Time." But, of course, it's her mastery of the big sax that makes this album such an attractive buy. Her tone is relatively light and always lyrical. "Softly as I Leave You" is done medium tempo with lots of musical transaction between the saxophonist and bassist Dave Hofstra and pianist Eli Yamin. Daly stays primarily with the lower registers of her horn to give a feel of jagged rhythms and impressionism for Thelonious Monk's "Bye-Ya." Monk's music is always a challenge to pull off, and Daly does it with both savoir faire and dash. Joining the group for a couple of cuts is Nancie Banks Orchestra and Don Byron group member, James Zollar. His hushed muted trumpet behind Daly's full throated baritone provides a very listenable counter balance on "If Ever I Would Leave You." A pertinent example of Daly's skill as an improvisor comes with a modern rendition of "After You've Gone" where she gets plenty of help from Eli Yamin's piano.

Although the theme for this session may not be the brightest, that situation in no way lessens the quality of the playing this contains. Recommended.