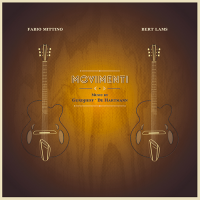 George Gurdjieff was one fascinating character: traveler, mystic, philosopher, composer and more. He taught that most people's consciousness is limited and there are other realms to be experienced after a spiritual awakening—time-honored ideas, yet provocative stuff for the early 20th century. His most famous collaboration was with Russian composer Thomas de Hartmann, which resulted in a musical travelogue that remains fascinatingly exotic even today. These are complex-yet-accessible pieces full of mystery, always reaching for something a little otherworldly.

It's quite a motley stew, drawn from Gurdjieff's own Armenian roots, central Asian folk, Russian liturgical songs, middle-Eastern hymns and many other sources. The songbook has been presented on piano by figures from Alessandra Celletti and Keith Jarrett to de Hartmann himself, among others. But Bert Lams' and Fabio Mittino's Long Ago (self produced, 2016) might have marked its first adaptation to the format of dual guitars. With Movimenti, the pair explore the catalogue a little further with the same exquisite skill and eloquence.

It is a convincing case of quality over quantity. Most pieces only last a minute or two (the whole recital caps off in under twenty), yet each one packs a lot of sharp detail into its own miniature portrait. "Tibetan Masked Dance" makes the busiest highlight at a precise rapid whirl while "Woman's Dance" and two "Dance in G" variations stay on the sedate side. Even "The Spinners" glides with unexpected calm. Maybe it is no coincidence that dances make such a recurring theme in the set—this is exactly how the pair and their guitars weave in fluid step as well. Rich in old-world roots and somehow timeless, the session is a dance of the most smart and stately kind.