By CHRIS MOSEY
February 7, 2019
Sign in to view read count 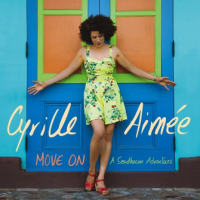 Cyrille Aimée's latest album may come as a shock to fans of the French vocalist. Gone is the light, bubbly approach that has been her hallmark. Aimée is now a "musical interpreter," no less, and is devoting a whole album to the late works of American composer Stephen Sondheim.

Except for Adrien Moignard's acoustic guitar on "So Many People," she has discarded her marvelous manouche backing band, depriving her of the interplay that made her recent stint at New York's Poisson Rouge so enjoyable. She is now accompanied by American studio musicians and—highly professional though they may be—the chaleur and charm of her work is gone.

Whether these songs deserve her devotion is also debatable. Sondheim is fast approaching his 90th birthday. We're a world away from West Side Story, first staged on Broadway in 1957, and from A Little Night Music and its hit "Send In The Clowns" from 1973. Sondheim's recent work is frankly stodgy, with an over-emphasis on words and not enough attention paid to the music. "No One Is Alone" makes a philosophical point rather than entertains. "Marry Me A Little" is plain outdated. "So Many People" hints at the writer's confusion as an octogenarian in the modern world.

Aimée copes pretty well. Occasional bursts of scat singing show she can still do jazz, and perhaps indicate nervousness concerning her change of direction. Her affection for these Sondheim songs seems genuine. Underneath her frothy French persona, Aimée is a tough cookie who will undoubtedly weather the storm should the rest of the world not share her enthusiasm.

When I Get Famous; Take Me To The World; Love I Hear; Loving You; Marry Me A Little; Being Alive; So Many People; Not While I’m Around; They Ask Me Why I Believe In You; No One Is Alone; Un Baiser D’Adieu (One More Kiss); I Remember; Move On; With So Little To Be Sure Of.