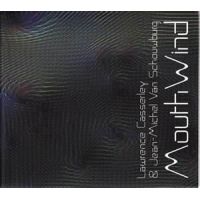 Recorded in May, 2010 at Lawrence Casserley's studio in the Chiltern Hills, Buckinghamshire, Mouth Wind is a happy pairing of Casserley's signal processing with the idiosyncratic vocals of Belgium's Jean-Michel van Schouwburg, a pairing which benefits both of them greatly. The duo format suits each of the two in a different way; in larger groupings such as Evan Parker's Electroacoustic Ensemble or a tutti at Fête Quaqua at The Vortex, Casserley's contributions can occasionally be too subtle or muted to be fully appreciated and become subsumed into the totality of the ensemble; by contrast, in common with other distinctive improvising vocal stylists—Phil Minton, Ute Wassermann and Sainkho Namchylak spring to mind—Van Schouwburg can appear to dominate an ensemble, a victim of the jazz and rock tradition of focusing on the vocalist to the exclusion of other ensemble members. But together, here, the two strike a balance that allows the contribution of each to be fully appreciated.

Across eleven tracks, varying in length from under a minute to ten-and-a-half minutes, the two create music that establishes a symbiotic relationship between voice and electronics—between man and machine. In common with his fellow vocal improvisers, above, Van Schouwburg employs a vast vocabulary of sounds, few of which convey any literal meaning—this is undoubtedly vocalizing rather than singing. On home territory, Casserley is clearly in his element, using Van Schouwburg's voice as his raw material, supplementing it with electronic sounds as well as molding and altering it electronically.

The end results have to be credited equally to both participants as, by turns, Casserley makes the singer sound like a wild beast roaring or snoring, a human in the throes of agony or ecstasy, a variety of cartoon characters, a deranged opera singer or a pod of dolphins communicating. True, many of those sounds are present in the singer's normal (untreated) repertoire, but here Casserley does not distort them; instead, he tweaks them to make them more themselves, a subtle but important difference. If electronics can dehumanize music in some contexts, the opposite is true here; the electronics serve to emphasize the all-too-apparent humanity of Van Schouwburg's voice.

Notably, the album is punctuated by four relatively brief "letter pieces": "Mouth 'G'"; "Bouche 'P'"; "Mond 'M'"; and Száz 'R.'" On each, Van Schouwburg focuses all of his attention on the letter in question, exploring the varying ways it can be pronounced and the nuances of emotion that it can convey. Here, the singer sounds more human than anywhere else on the album. At one level, each piece sounds like an exercise that a vocal coach might set to a pupil, but the four hang together well as a mini-suite.