By DAN BILAWSKY
February 24, 2013
Sign in to view read count 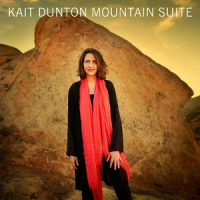 The seeds for this project were planted when pianist/composer Kait Dunton jotted down a few measures of music while sojourning in the Canadian Rockies, but this passionate music actually sprung to life inside a recording studio in Pasadena, California. Dunton, a Los Angeles-based artist pursuing a doctorate at the University of Southern California's Thornton School of Music, gathered a USC-associated dream team together to bring this project to fruition, but this is anything but an all-stars-carrying-the-young-kid session; there is no doubt that Dunton is the chief operating officer here.

Mountain Suite is a collection of themes, moods and settings that works best when taken as a whole, rather than absorbed a track at a time. It's a captivating journey filled with multihued expressions, covering a wide expanse of emotional possibility that moves from sadness to joy and uncertainty to inevitability over time. Some tracks showcase Dunton-as-composer ("The Dream") while others shine a spotlight on her performing side ("Path"), but the complete artist is what remains on the mind when all is said and done.

Simplicity appears to be at the core of this work when the album opens ("Day One"), but that thought is quickly dispelled; "Path" immediately makes the case for Dunton as a voice of the future. As the album continues, she explores an isolated version of wonder with some help from bassist Darek Oles ("Enchantment"), creates a downy bed for the ears ("The Dream") and lets trumpeter John Daversa and saxophonist Bob Mintzer go at it ("Mountain"). Drummer Peter Erskine is his usual superb self throughout, whether setting a groove in motion or simply providing a brief cymbalic gesture. Some tracks don't quite live up to their name ("Night") but still meet high standards, and other numbers hit the title nail on the head; boundless joy and scampering sounds, for example, are ever-present on the aptly named "Frolic."

To some people mountains mean majesty and to others they mean grandeur but, above all else, mountains point to a firm standing and a permanent place on the horizon; Dunton has certainly earned her place on the jazz horizon with this one.