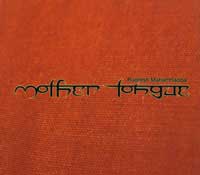 When Indian-American altoist Rudresh Mahanthappa was growing up outside of his family homeland, he was frequently asked "Do you speak Indian?" or "Do you speak Hindu?" The questioners were apparently unaware that India isn't a mono or bilinguistic country and that its landscape includes seven languages. His eventual response to this was Mother Tongue , a CD featuring songs which are based on musical transcriptions of Indian-Americans answering that question, most of which are entitled for the language in which they respond, interpreted nimbly by a fine quartet featuring Mahanthappa, pianist Vijay Iyer, bassist François Moutin and drummer Elliot Humberto Kavee.

There's prologue, though, before the questions are answered. "The Preserver" is a pulsating burner in the vein of late-period Coltrane, with Mahanthappa supplying frentic raga-based riffs. "English" is a tune where general harmony transcends the gentle discord expressed through non-linear but well-coordinated playing. "Kannada" slows down the pace a bit, with Iyer following Mahanthappa's brooding, lyrical ideas and using them to form his own statement.

"Konkani" and "Tamil" are examples of organized chaos, brooding, almost angry and although the songs are almost anti-harmonic in the way they're built, it all comes together and works. "Malayam" is a solo turn by Mahanthappa, which proudly announces his Indian roots within the context of jazz, as fervent and heartfelt as a prayer. The final song, "Change of Perspective," could be called "Thus Spoke Mahanthappa" because it spirals along on a three-note figure at its center that rivals the A-C-E triad defining Strauss' "Thus Spoke Zarathustra." Played initially at a measured pace, it accelarates to Mahanthappa's stream of consciousness solo, capped off with more Indian-influenced blowing at the end.

Mahanthappa's style varies from song to song, from single note phrases, to cascades, to querulous growls, clearly influenced by the rhythm and tone of each language he examines. And if there's a song for each language, then his composing and sax playing, like India itself, supports them all and provides dynamic common ground for their expression.