By RIEL LAZARUS
November 16, 2006
Sign in to view read count 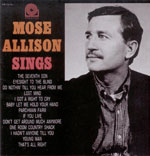 Working through Prestige Records' reissue of Mose Allison Sings, the challenge arises of describing the pianist/vocalist's unique sound. The salty-sweet taste of butter and jam on toast is at once an unspectacular metaphor and right on the mark.

Allison's music is a delicious blend of tart and tang, as enjoyable in the morning as it is a late-night snack, simple yet significant, unassuming and infectious. His style is indelibly his own, residing somewhere between the Delta blues of his Mississippi home and the modern jazz he was immersed in upon moving to New York in 1956.

The album, originally released in 1963, is a mix of selections from Allison's first six Prestige outings (recorded from 1957-59). This period marks the emergence of his sound onto the jazz charts and covers many "Mose Classics," including his fresh takes on Willie Dixon's "The Seventh Son and Percy Mayfield's "Lost Mind," as well as Allison's own "Parchman Farm and "If You Live.

The playing is reduced to the barest essentials, the numbers kept short and sweet, giving the overall character of the music a crisp, consistent color. Allison's trios swing without restraint, but never a second too long.

As a bonus, three instrumental tracks have been added to the list—"Blueberry Hill, "Trouble In Mind and "Creek Bank —reminding the listener that the magic of Mose is as much in the fingers as in his warm-putty voice. The material sings throughout, and for that reason it deserves a place among all open ears.

The Seventh Son; Eyesight to the Blind; Do Nothin' Till You Hear from Me; Lost Mind; I've Got a Right to Cry; Baby, Let Me Hold Your Hand; Parchman Farm; If You Live; Don't Get Around Much Anymore; One Room Country Shack; I Hadn't Anyone Till You; Young Man's Blues; That's Alright; Blueberry Hill; Trouble in Mind; Creek Bank.