[Weiss and Most] prove on this thoughtful exchange that they no longer need to prove anything. 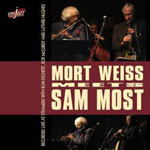 If a quieter recording has been produced by a jazz quintet, I have yet to hear it. In fact, any listener who breathes too heavily while playing this CD may be forgiven for assuming the mute button has been activated.

Veteran clarinetist Mort Weiss and multi-woodwind player Sam Most, remembered by many as a flautist extraordinaire on the 1950s West Coast scene, prove on this thoughtful exchange that they no longer need to prove anything. These are seasoned musicians who have paid their performance dues many times over; all that remains is communication—with each other, with the audience present during this on-location March 2006 session, and finally with listeners to the album. With raconteurs of this caliber, what they have to say, even though it's a familiar story, bears repeating .

Weiss' is certainly the most heartening tale. Hounded and eventually overcome by various addictions, he dropped out of music entirely in the early 1960s, only to emerge sounding fitter and fresher than ever after a 35-year hiatus from his clarinet. His post-bop harmonic ideas, delayed articulations, and slightly behind-the-beat phrasing are reminiscent of Tony Scott, while his woody and cured tone, varied vibratos and pitch bends are apt to make you think of Eddie Daniels. On the opener—Miles Davis' "Four" (would even "Satin Doll" have been a more obvious, thread-worn choice?)—Weiss grabs the listener's attention during his solo with a quote from "Jitterbug Waltz," anticipating his fuller, near-virtuosic treatment of the same tune a few tracks later.

Sam Most surprises, first, by going with tenor saxophone on the program's first three selections and, second, by employing a sound that is closer to that of Weiss' clarinet than to virtually any other tenor player who comes to mind. Lester Young, himself a clarinetist, could make his tenor sound like its smaller, straight-shaped predecessor, but not as convincingly as Most does on this occasion. He provides so little breath support and fills so little of the chamber of the horn, the wonder is that he's able to extract anything that's even pitch-worthy. Any listener who has felt the earth move under foot during the withering, volcanic onslaught of a Roland Kirk tenor solo is likely to receive a jolt of a different sort by the nearly unrecognizable tenor sound produced by Kirk's antithesis on this recording.

It's when Most goes to his flute that the space separating him from Kirk as well as from his own early recordings all but vanishes. His solo on "Jitterbug Waltz" is nearly the equal of Weiss's in virtuosity and melodic ideas, while he chases away any trace of languor and sentiment from "Poor Butterfly" with a spirited, energetic solo that finds him double-tonguing while doubling the time and humming along with the sound of his flute.

By now the listener can sense the wisdom of starting the program with a set of overplayed, even tired "real book" standards, in an understated style likely to invite if not require the listener's focused attention rather than risk increasing impatience. Almost imperceptibly, the volume levels have been raised, the tempos increased, the melodic ideas pushed to greater complexity—all of it coming as the listener's "reward" for adjusting to the subtle dynamic parameters established during the first three selections.

Not that there isn't any substance on the opening tunes, most notably from the Jim Hall-influenced guitar artistry of Ron Eschete, who inserts brief single-note patches primarily to set off the singular beauty of his chorded solos. His turn on "I'm Old Fashioned" is representative of what's to come: harmonized solos that never sacrifice clarity of line to overly crowded textures on the seven-string instrument and that employ voice-leading so judiciously there's rarely a forced moment or shaky transition in the harmonic narrative provided by guitar in its role as either accompanying or solo voice.

As previously stated, these are musicians who have nothing to prove, but if some is required, they provide it with a closing "Donna Lee" taken at a tempo that's not a nanosecond slower than Wynton Marsalis' performance of the tune on last year's Live At The House Of Tribes. The tune also affords Weiss an opportunity to call attention to the unfailing, redoubtable support of drummer Ron McCurdy and bassist Luther Hughes, both of whom are so tightly integrated within this collective endeavor that it's apparent they have no more to prove than do the principals.

Younger musicians who still have the garage band mentality that seems to afflict most rock ensembles and many jazz-fusion aggregations, might do well to use this recording as an example of what can be accomplished by just five, probably unrehearsed, musicians who bring nothing to the bandstand except their instruments and a commonly shared repertory of tunes. This is a recording that retains the spontaneity of a jam session while distinguishing itself from most such affairs because of players who clearly know when to talk and when to listen.

Tracks: Four; I'm Old Fashioned; Night In Tunisia; I Got It Bad And That Ain't Good; Jitterbug Waltz; Poor Butterfly; With A Song In My Heart; My One And Only Love; Medley: Donna Lee/ (Almost) Blues in the Closet.

Four; I'm Old Fashioned; Night in Tunisia; I Got It Bad and That Ain't Good; Jitterbug Waltz; Poor Butterfly; With a song in My Heart; My One and Only Love; Medley: Donna Lee and (Almost) Blues in the Closet.

About Mort Weiss and Sam Most