By SAMUEL CHELL
November 25, 2006
Sign in to view read count 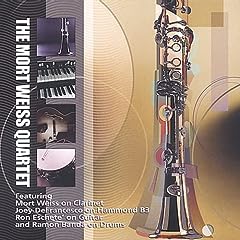 "OK, let's just do it." The B3 player riffs on a dominant 7th sus chord; the soloist, eager to get it on, makes an entrance four measures into the organist's eight-bar intro, then waits four more bars before beginning the resilient "There Will Never Be Another You." The organ drops out a measure ahead of the first "ride" chorus, re-entering with a bass-note bomb anticipating the second beat of the chorus with enough force to propel soloist and listener alike into some outer orbit.

And so go the opening moments of this "casual" session pairing Mort Weiss' deceptively overmatched clarinet (recently out of storage after forty years!) with Joey DeFrancesco's mighty music machine. What distinguishes this one from its successor, The B3 and Me, is that Weiss employs his own rhythm section here, whereas the later disc features DeFrancesco's disciplined unit. What the later recording has in polished power, this one makes up for in the sound of surprise.

Ron Eschete may not be a hard-core B3 guitarist, but few of the latter would have had the presence of mind to come up with a quote from "Cocktails for Two" on the opening tune. Next, "Yours Is My Heart Alone" locates an invigorating groove considerably faster than the medium tempo normally favored by players drawn to the operatic melody, with DeFrancesco's solo featuring some wild registrations that must be missing on the drawbars of most other B3 players' instruments.

After Eschete's reading of the rarely heard verse, the group goes to work on "All the Things You Are." Weiss starts the double-timing and Eschete does the same with choruses of ascending notes, ironically culminating with a quote from "Fly Me to the Moon" before passing the torch to DeFrancesco, who stokes the flame—just prior to Weiss leading the troops to the exit, everyone in synch but not in step for a collectively improvised wrap.

Then comes the ballad—an especially affecting interpretation of "For All We Know"—all but erasing the memory of numerous saxophonists who have schmaltzed their way, however "soulfully," through the same tune. Ballads seem to take a special shine to Weiss, whose sound on clarinet is a thing of beauty—rich, complex, vibrant and alive, especially in its glowing and burnished mid-register—and DeFrancesco leaves lots of light and air for it to flourish in.

Before the party is over, a DeFrancesco shuffle-rhythm blues, three more swing staples, and the always-inviting melody of "The Masquerade Is Over" acquire deep- grooved traction. As DeFrancesco is quoted in the notes, "It was a fun date!" And as if a second were needed—"And a good time was had by all."

There Will Never Be Another You; Yours Is My Heart Alone; All the Things You Are; Joey's Blues; For All We Know; Fly Me to the Moon; Avalon; The Masquerade Is Over; Three Little Words.