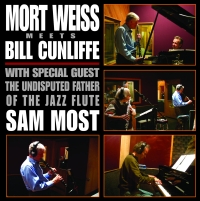 If it is a Mort Weiss recording, bebop cannot be very far away. Competent bop clarinetists are as scarce as hen's teeth, the most critically accepted being Tony Scott, Buddy DeFranco and Weiss. Weiss' most recent recordings, Mort Weiss Meets Sam Most (SMS Jazz, 2006) and B3 and Me (SMS Jazz, 2006), reflect his solid bop reverence.

Weiss' Mort Weiss Meets Bill Cunliffe brings the clarinetist into orbit with pianist Bill Cunliffe, another jazz musician sympathetic to Weiss' bebop cause. Miles Davis' "The Theme" kicks off the disc, Weiss playing accurately, at a high velocity, seeming to take off when trading eights with drummer Roy McCurdy and Cunliffe. He reaches bop critical mass with Charlie Parker's "Dewey Square," he and Cunliffe demonstrating a swing synergy not possible in lesser talents.

While bop is his long coat, Weiss is equally adept in other earlier forms as demonstrated by his fine ballad playing on "Who Can I Turn To" and "The Gentle Rain." Weiss demonstrates his generosity by allowing writer (and here, clarinetist) Scott Yanow, a turn on Harry Smith's 1921 composition, "Sheik of Araby." "For Heavens Sake" and "Who Cares" are similarly well dispatched by Weiss and Cunliffe, who play with both certain speed and sensitivity.

Weiss hosts flautist Sam Most on "Indian Summer" and "The Gentle Rain." The wooden tone of the clarinet mixes well with the sharper and more metallic flute. The two instruments are well suited for these slower, more introspective pieces. Most's flute also adds a bit of the islands to the sound of the combo.

Included on this disc of otherwise very mainstream jazz is the song "Awake," penned by Weiss' grandsons Anthony and Brent. This is not jazz, but very serviceable alternative pop. Its inclusion is quirky save for "Readings of Kerouac I," narrated by Peter Marx, a hipsters dream. Mort Weiss Meets Bill Cunliffe arrives just in time that we not forget that the clarinet is a beautiful, if demanding, mistress.

The Theme; Who Can I Turn To; Indian Summer; The Gentle Rain; What is this Thing Called Love; Readings of Kerouac 1; My Ship; If I Should Lose You; The Sheik of Araby; Dewey Square; Awaken; For Heavens Sake; Who Cares.