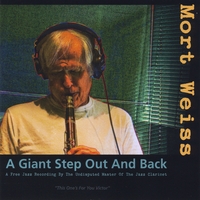 A while back, flamboyant and forthright clarinetist Mort Weiss sent an email saying he was going to make a free form album. Frankly, it was hard to believe as no-one had been more against free form jazz than Weiss. For around two years he had been taking free form apart, decrying many players and the genre, implying it was, "Emperor's New Clothes" or worse, and now, finally, had he really come round to liking it and even performing free form? Sure enough, a couple of months later, Weiss duly dispatched himself to a studio where he laid down tracks for A Giant Step Out and Back. He sent an email, indicating he had put his heart and soul into it and he hoped it would impress.

The CD has an impressive list of tunes, with composers including Benny Golson, George Gershwin and Thelonious Monk, in addition to Weiss originals. Weiss overdubs over an improvised first take to create a duet effect on several tracks, sometimes more than once to create a fugue or trio effect. Weiss has, with his trusty ax, a lot of soul and, with a good deal of physical effort, created a musical quirk.

Different, yet indefinable and unclassifiable. It is impossible to label this music or put it firmly in a box. It is not free form—not strictly improvised—but something in between. On the Monk tune "Straight, No Chaser," Weiss delivers an education in speed. How quickly his fingers move up and down the keys in scales, how seamlessly the breaks in registers are made, yet the tune remains strong and present, undeniably Monk. Gershwin's "Summertime" is treated to Weiss's inimitable take, the notes tossed like feathers to the wind, though the tune remains discernible in many places, improvised to within a note of its life.

"Dark Eyes" is improvised to the extreme, while "Transfiguration" crescendos from a mesmerizing opening to dizzying middle section and interplay of instruments. Throughout the CD, Weiss explores the extremities of his ax, the instrument through which he expresses his quirky and altruistic take on life.

It is not so much about the actual result, but more about being (almost) part of the process. Weiss, seeking to share the art of making music—even the technical side—revealed many of the discussions he had with producers, studios, printers, CD producers and photographers via email, making it possible to watch the birth of a CD, from concept to finish, which has been a privilege in itself.

Weiss recently explained that he wanted this CD—possibly his final one— to ensure a mark was left to show that "Mr. Weiss had passed this way." He needn't worry; many people will remember Weiss and he is not done yet by any means—not for a long time.

While this CD is not a free form recording per se, Weiss has achieved something completely different; the sounds are unique and from the heart. Weiss expressed that he wanted to play his emotions on the album, playing music from the spirit; he prepared physically and mentally for this change in direction and it was clearly worthwhile. Weiss's venture into free form opened up his soul, he has said, and this comes across in the playing.

A player who ventures so far off their previously driven road is awe- inspiring. What Weiss has achieved is , well, a Weiss CD: intricate yet simple, a release of emotion.

A Giant Step Out and Back is an album which takes more than one listen as it is so different from what might be expected from Weiss, but is one to enjoy. From the opening, "A Trane of Thought" to the final "Warm Up," the music is interesting, different and surprising.

The introduction on the inner sleeve states, "A free jazz recording by the undisputed master of the jazz clarinet." Weiss said recently," I just did my thing and let God sort out the pieces." He did a great job.

A Trane of Thought; All The Things You Are; Allegory; Dark Eyes; Fair Weather; Goodbye; Invitation; Javini; Soliloquy; Straight No Chaser; Summertime; Talkin’ About It; Transfiguration; Waltz For Debbie; Warm Up.