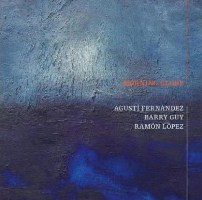 In what could easily mistaken for a release on the ECM label, Morning Glory inhabits that crisp minimalist style so familiar to producer Manfred Eicher. Surprisingly enough, this studio recording, with bonus Live In New York disc, is delivered by three of today's most zealous improvisers and outcats.

Formed in 2005, the trio's previous release, Aurora (Maya, 2006), began bassist Barry Guy established their improvisation bona fides with saxophonist Evan Parker's intellectual explorations and Mats Gustafsson's noisier ones. Each player also has a dedication to classical and chamber musics and perhaps that is where these compositions and improvisations intersect.

Disc one, the studio session Morning Glory, is a combination of six composed pieces by Fernández and six group improvisations. While the compositions are influenced more by melody, the improvised parts stick to the trio's minimalist guidelines for music-making. That is, their brush strokes are nominal, like shodo or Japanese calligraphy. The trio performs simple melodies and improvised ballads, speaking softly with a very big brush. The music is a cross between the 1960s trios of Bill Evans and the modern work of Marcin Wasilewski.

The bonus CD, recorded live in 2009 at New York's Jazz Standard, finds the trio stretching out a bit from the punctiliousness of the studio set, slightly departing from its reserve. Playing the music first heard on Aurora, the three take a few liberties to move a bit more outward for the audience. Still, nothing detracts from the intimacy created by these masters.