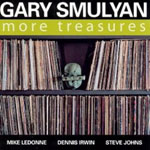 Perhaps if you asked jazz fans to name a progenitorial baritone saxophonist, they might name Harry Carney or Gerry Mulligan. Yet Gary Smulyan's lineage comes more from musicians like Cecil Payne, Leo Parker, Pepper Adams, Serge Chaloff and Nick Brignola—the few baritonists that dared to master the tricky, chromatic music known as bebop. Indeed, More Treasures is oozing bebop and Smulyan is fluent in the language. Some tracks are performed with sax, bass and drums only and though this is not stylistically coming from the same place as, say, the Sonny Rollins or Ornette Coleman trios, without a chordal instrument the sonic results are similar—an increased focus on the tone of the saxophone and a highlighted awareness of the melodic/rhythmic counterpoint between the instruments.

Smulyan's sound is rich with a broad spectrum of sonic colors, from low register pops and grunts, a lyrically singing mid-register and accurate, usually squeak-free altissimo. Tadd Dameron's "Stop" is a trio performance that starts with a kind of rumba groove but then settles into a medium swing progression. Here one can hear how awesome bebop chops can peacefully co-exist with an easy swinging rhythm. Following the leader's solo on "Stop" is like looking at an MC Escher drawing—ascending and descending at the same time, an impossibility, yet there it is for all to see/hear, perfectly formed. Gigi Gryce's "Sans Souci" has a Latin tinge throughout; with only bass and baritone to spell out the interwoven harmonies, Smulyan and bassist Dennis Irwin prove once again that they speak the language of bebop with ease and enthusiasm.

Horace Silver's "Quicksilver" features drummer Steve Johns, whose playing is uniquely exciting and accurate. Pianist Mike LeDonne plays an amazing solo here, as well as on "Wham & They're Off" and "Chick's Tune." LeDonne proves to be a great sparring partner for Smulyan, yet his gentle accompaniment on "Beautiful You" allows all the nuance of Smulyan's tone to shine through. "Suburban Eyes," Ike Quebec's line based on Bronislaw Kaper's "All God's Chillun Got Rhythm" (here incorrectly attributed to Monk, though it's probably best known from the pianist's Genius of Modern Music, Volume 1), also receives a genuine and enthusiastic performance, perhaps one of Smulyan's most excited (and exciting) solos. This is one of the best CDs contemporary Mainstream has offered recently.