By BRUCE LINDSAY
November 7, 2011
Sign in to view read count 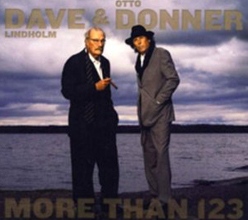 The world is a heavy object: a very heavy object. And there are times on More Than 123 when the weight of the world seems to press down particularly heavily on the shoulders of Finnish singer and guitarist Dave Lindholm. Thankfully, Lindholm responds with a wealth of stories delivered with a gritty, bluesy, voice and backed by the darkly atmospheric sounds of a fine band conducted by Otto Donner.

Both Lindholm and Donner are veterans of the Finnish music scene: Lindholm released his first record in the early '70s, while Donner's career began a decade earlier. On the evidence of this album both men have a great love of the sort of big band R&B made famous by the bands of players like Ike Turner and Johnny Rivers. The exception is "Lucky Johnny's Gone," with its weird but atmospheric combination of fairground and funeral music, made especially evocative by Mikko Helevä's Hammond organ.

Lindholm delivers "Why I Smile Again," a song about finding love, with a whisky-soaked vocal that belies the positivity of the lyric. "Oh, Don," Lindholm's take on the gun-tottin' revenge of "Hey Joe," gets a similar treatment from the singer, but he adds some sympathetic guitar lines and Tero Saarti's trumpet solo is punchy. On "I Know My Boulevard," co-written by Lindholm and Donner, Lindholm's voice is lighter, sacrificing world-weary gravitas for a more upbeat swing. The band responds beautifully, performing Donner's boogie shuffle arrangement with palpable enjoyment.

More Than 123 is a relatively brief excursion into the world of Lindholm and Donner: but like all the best excursions, it tantalizes and intrigues and leaves the visitor looking forward to a return journey.