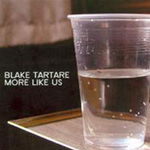 More Like Us is the second release from saxophonist Michael Blake's Blake Tartare, with three Danish wunderkinds: keyboardist Soren Kjaergaard, bassist Jonas Westergaard and drummer Kresten Osgood. As the title suggests, the group has developed cohesion, easily maneuvering the circuitous compositions on the disc.

The subtle opening of "The Meadows shifts after Blake's pronounced fluttering theme; the rhythm section bolsters him through a freer blowing section until Kjaergaard reels it in—effortlessly gliding through the changes. Similarly, on "Something in the Water, the urgency of Westergaard and Osgood's groove under Blake's bouncy soprano line lithely transitions to a section inspired by Mingus' "Meditation... (covered on their debut recording) for the leader's bass clarinet musings.

The CD is full of firsts for Blake the leader. On "Hush, Maria Laurette Fris' wordless vocals add texture, doubling the piano's austere melody and represent the first vocals on a Blake release. Fris returns for her "To Whom This May Concern with a singsong delivery of the bittersweet lyrics. This is another first: Blake's recordings have featured his tunes, not those of his musicians. The leader wields a clarinet on "Hush, an instrument he uses as a sideman, but not for his own music. The woody tone blends effectively with guest cellist, and fellow Lounge Lizards alumnus, Jane Scarpantoni's foreboding counter line.

Speaking of the Lizards, in another first, Blake interprets one of their tunes—the crowd-pleasing, though never released "Happy Old Yoy. Kjaergaard nails the staggering piano line, its rhythmic feel the foundation for the whispered lines of Blake and another guest Lizard alum, slide trumpeter Steven Bernstein, who soars over the quirky meter. For a final premiere, Blake adds his raw vocals to the reggae-inflected "Johnny Too Bad, the subdued tempo building for a classic R&B tenor solo over the outro.

Blake offers something different to make each new release unique, but he still retains his compositional identity. More Like Us successfully maintains that delicate balance while living up to its name.

Hush; The Meadows; Happy Old Yoy; To Whom This May Concern; Something in the Water; Maria; Africa Used to Be Home; Interlude With Soren; Paddy Pie Face; Johnny Too Bad.