By JOHN KELMAN
September 30, 2007
Sign in to view read count 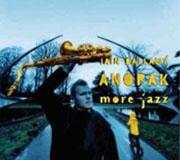 It's easy to forget that many musicians who are pushing the boundaries of improvised music do have an understanding of the conventional jazz tradition. Whether it's guitar icon John McLaughlin and his fusion group The 4th Dimension reverently discussing Sinatra at the Sands (Reprise, 1966) in the tour bus or German bassist Eberhard Weber swinging Carla Bley's "Syndrome with mighty aplomb on Stages of a Long Journey (ECM, 2007), it's become increasingly evident that the choice not to play mainstream jazz is just that: a choice.

The same can be said about saxophonist Iain Ballamy, his latest group Anorak, and its debut CD More Jazz. Ballamy has, since emerging in the mid-1980s, been more closely associated with envelope-pushing groups like Bill Bruford's Earthworks and Loose Tubes, while in recent times he's been exploring the nexus of improvisation and electronics with the Anglo/Norwegian collective Food, and the place where traditional British folk meets exploratory jazz with Quercus, featuring singer June Tabor and pianist Huw Warren. More Jazz may be the most overt and unapologetically jazz album Ballamy has released to date, but that doesn't mean it hasn't got its fair share of surprises, or that it's anything less than completely contemporary.

From the opening—a fiery version of the Sinatra staple "My Way —it's clear that Anorak—is comfortably hovering somewhere between the mainstream and left-of-center. Ballamy's always been a player who places the song first and foremost, but he still burns with focused energy here, with pianist Gareth Williams layering altered harmonies that expand on Ballamy's expanded arrangement, while bassist Orlando Le Fleming and drummer Martin France provide a strong yet supple and unfailingly responsive foundation.

Ballamy deconstructs and reconstructs the classic "All the Things You Are as "Of All the Things, hiding the original in a wealth of modernistic harmony and a forward-moving yet loosely constructed rhythm. France is especially impressive here, as he runs the gamut from light cymbal work and occasional snare punctuation during Ballamy's fluid solo, to a more aggressive snare backbeat during Williams' equally well-constructed solo. It's no wonder that he's become increasingly in demand on the British scene, working with everyone from pianist John Taylor to Chris Laurence

Elsewhere, Ballamy goes modal on "Tribute to Alan Skidmore's Tribute to John Coltrane. "Convolution (for Dudley Moore) Starts in bossa territory but, like the late comedian/pianist, demonstrates a wry sense of humor as the tune navigates a series of twists and turns that may have been a challenge to play, but remain completely accessible.

It's Ballamy's ability to take conventional form and skew it ever so slightly while remaining eminently approachable that makes More Jazz an album to confirm his jazz credentials to naysaying purists. It also reaffirms his position as a forward-thinker, however—even in the most conventional of contexts—making it just as a strong bet for fans of his more experimental projects.

My Way; Of All the Things; Tribute to Alan Skidmore's Tribute to John Coltrane; Convolution (for Dudley Moore); Recedar; I Got Rid of Them; St. Ella; The Worm; St. Ella (reprise).