By DAN BILAWSKY
December 3, 2016
Sign in to view read count 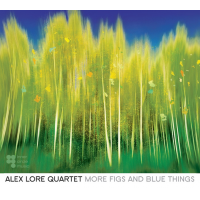 Saxophonist Alex LoRe is a musician of philosophical and poetic bent. With his debut—Dream House (Inner Circle Music, 2014)—that wasn't always apparent, as the scales slightly favored progress over patience. Here, the balance tips the other way, but not so much so that things become tedious. LoRe may be a deep thinker, but he doesn't allow his music to get mired in his own thoughts.

There are two major agents of change that help More Figs And Blue Things to stand apart from Dream House. One is the addition of pianist Glenn Zaleski to the already established trio of LoRe, bassist Desmond White, and drummer Colin Stranahan. The other is the musical seasoning and maturing that simply come with time. Both are audible right out of the gate with "Southbound," LoRe's look toward his Florida home. Zaleski's piano acts as something of a binding agent, bringing every facet of the music together, and LoRe plays at reflective glances without getting bogged down by sentiment. It's a new day—and a new level of comfort and confidence—for the saxophonist and his music.

Part of the beauty in experiencing this album is in witnessing how LoRe maintains his sangfroid in a variety of situations, be they single-minded in focus or episodic in nature. "Next Time" falls into the latter category, opening on a bass riff that serves as harmonic seed material before visiting active and cool-headed realms. It's the first of several pieces to find interesting ways to branch out without presenting those branches as tangential trips. Along those same lines is "Cold Spring," LoRe's musical depiction of skiing down a mountain trail in Idaho. A start-stop passage serves as an introduction before the beautiful rush takes hold, with loose snow drifts flying in the face as gravity and man do the work. What starts as adrenaline-fueled intensity then evolves into zen-like peacefulness. But the need for speed eventually wins out. It's an act of return in a compelling aural novella about man vs. mountain.

Those aforementioned pieces point toward LoRe's love of narrative arcs, but they don't fully represent the man. Elsewhere, he works in very different ways. On "Away" he puts Zaleski's ruminative piano in the spotlight, waiting several minutes before entering the picture; with "Wild Things" he mixes in a touch of abstraction, largely tied to his interaction(s) with the pianist; and on "Normal" he toys with the notions of normalcy, using angularity and the element(s) of surprise to his advantage.

LoRe likens this group to a chamber ensemble, and it's easy to see why once you've encountered this music. His embrace of classically-oriented ideals and strategies allows him to move beyond standard jazz forms and tired formulas, yielding music of great(er) interest. To say this is a step above Dream House would diminish the quality of that previous effort, so better to simply say this is a step beyond it.