By ROGER FARBEY
December 1, 2018
Sign in to view read count 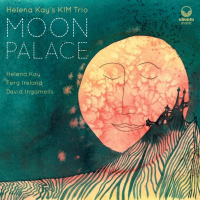 Young Scottish Jazz Musician of the Year 2015, Helena Kay is joined on her debut album by Ferg Ireland on bass and David Ingamells on drums. Kay studied for a BMus Jazz at the Guildhall School of Music and Drama in London, graduating in 2016 with First Class Honours. She was also awarded the Anjool Malde Jazz Prize for the highest jazz final recital mark that year.

The opener "L And D" is characterised by its alternately fast/slow tempos and Kay's lines being closely shadowed by Ingamells. Additionally there's the added bonus of exuberant solos by the bassist and Ireland on drums. The Latin-esque "Feijão" is a double tribute, primarily it's a heartfelt paean to the great Brazilian composer Antonio Carlos Jobim but it's also a reference to Kay's change to a vegan diet, since the Portugese title translates as "beans." "Kim" is a sprightly interpretation of the Charlie Parker number made all the more intriguing by the fact that it's effectively a duet between Kay and Ingamells on drums.

Named after the street Kay stayed in whilst visiting New York, the pedestrian pace of "Perry St" holds several surprises. No fewer than three times there's a deliberately coordinated drop-out lasting a full five seconds each time. The number is held together by its andante tempo as emphasised by pizzicato bass, and slinky tenor melody. The ensuing title track has a labyrinthine quality but is no less appealing for that. The stately head yields to a flourish of tenor deftly underpinned by bass and drums. The set concludes with Hoagy Carmichael's famous standard "Stardust," Kay playing unaccompanied here with sheer elegance and fluidity throughout the duration of the three and a half minute tune.