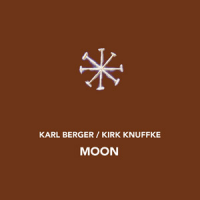 Cornetist Kirk Knuffke joins veteran German vibraphonist Karl Berger for a poised meditative duet on Moon. The origins of the set lie in a meeting at a concert celebrating drummer Ed Blackwell in New York City after which Berger invited Knuffke to his Creative Music Studio to teach. So successful was the endeavor that the duo was born. Each of the principals contributes half a dozen pieces supplemented by four joint ventures in a program comprising eighty minutes of music from twin sessions at Berger's Woodstock studio spread across two CDs.

Conversational similes come to mind more readily in describing these performances than most. Not only because of the intimate yet exposed setting, but also because of the high degree of relaxed discourse and the brevity of any solo passages. In their harmonious interplay each considers the other's central argument before agreeing or contradicting to sensitively furthers the discussion. In spite of a sequence of lively selections at the end of first disc, the overall feel is one of reined in emotion and mellow late night music.

Knuffke spins elegant, mellifluous lines in which repeated utterances introduce a gently assertive element. His exquisite vocalized cornet murmurings on "No one will be here over there," hint at restrained passion. Knuffke's melodic predilections shine out even on the improvs such as "Pedal" and "Turns." Berger's vibes are correspondingly delicate and transparent, with subtle variations of touch, timbre and dynamics, although he emphasizes the percussive aspects only occasionally, as on the sprightly "This is what we're thinking." Berger further varies his palette by switching vibes for piano on seven numbers and even accordion (uncredited) on the jerky exchanges of the boppish "Point Point."

Two cuts from Knuffke's pen form a lovely opening salvo to the set. On "Bell" he reiterates a tender cornet air against a backdrop of barely there vibes which sketch out the harmonic framework. That's followed by more beautifully lyrical fragments on the title track. Playful interaction abounds. "No No Thank You" features spare dialogue between cornet and vibes, slowed down like stretched out nursery rhyme, while after a couple of brief extemporizations, the album comes to a thoroughly satisfying conclusion with the jaunty give and take of "Lolaneta" for piano and cornet.

Bell; Moon; Movies; No one will be here over there; Pedal; Poem; Point Point; This is what we're thinking; Travel East; Sneakhead; Isn't it time; Turns; No No Thank You; Taunts; Terrace and Trees; Lolaneta.