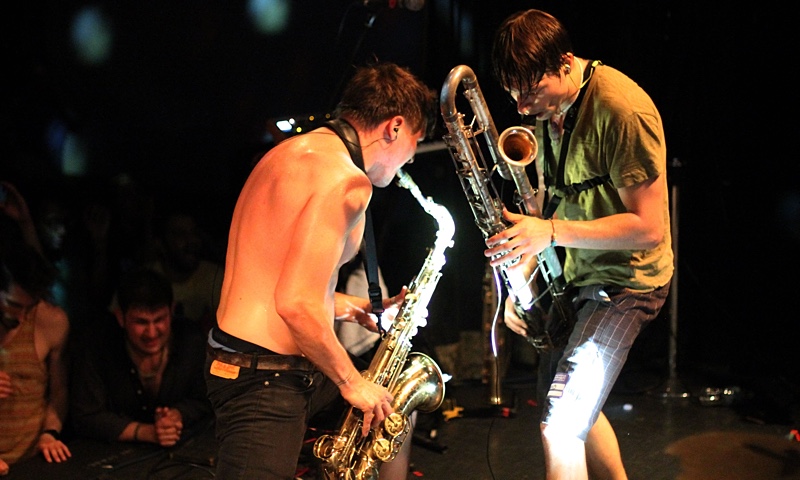 It was an interesting combination. Two saxophones and a drummer, along with a sound system that kept everyone on their feet, if not dancing. The up-and-coming New York aspirants Moon Hooch (previously touring with They Might Be Giants, Lotus and Galactic), on a nationwide tour, made a stop at Kalamazoo's Shakespeare's Pub on Friday, May 29. And, in the wake of their 2014 release This Is Cave Music (Hornblow Recordings/Palmetto Records), what a stop it was, the band playing as if they were doing a retirement party, for themselves. "Themselves" being horn players Mike Wilbur and Wenzl McGowen and drummer James Muschler.

That combination also included a jam-band vibe, a kind of primitive house music that seemed to build on the previous group's more traditional approach to jamming, long stretches of improvising between the horns and a relentless, frayed disco beat animating this downstairs crowd of mainly 20-and 30-something partygoers. The overall impression, and the initial impression to boot, was the creation of a pseudo big- band mashup with that predominantly disco beat, creating worlds bigger than the sound of three people playing music. Yes, lots of booty- shaking, but not necessarily of the dancing variety.

With unannounced tunes (the band provided no real spokesman) flowing into each other, for anyone who wanted to stray in a musical way, Moon Hooch may have been the band to follow. The setting was as much a part of the show as the music itself, with hippie-styled long dresses, tank tops and lots of long, long hair (and a reminder that the '60s look, if not sound, will always be with us). A regular feature of this downtown Kalamazoo venue, people could be seen off to the side painting on canvases placed on easels, while others made more adventurous moves on the dance floor and, in at least one instance, a young lady seemed to be straight from a Barnum & Bailey Circus gig with hula hoops that didn't just visit her hips but somehow became a part of her body, all four limbs not to mention head and neck in on the act. Her moves—seemingly in synch with a music that was insistent, propulsive—were like those of an acrobat without the rings and aerial pursuit. The crowd persistently let out explosive hoots and hollers as the unusual combination of saxophones (as opposed to the usual guitar- centric approach) merged with the disco beats and occasional vocals.

You had to be standing in this room of about 200 to be able to see the band, since the only seats available were toward to back, where people routinely placed their beers on tables with folks more inclined to view and sip from chairs. The band itself, performing on a platform, would create pregnant pauses only to resume in a timely fashion, creating a hypnotic, frenzied effect on the audience in what seemed like a programmed rave, a non-stop musical extravaganza. It was a sound system with the emphasis on the bottom end with a constant sonic buzz. This was dance music, the artistry no doubt the result of many days and nights jamming on New York City streets and subways en route to playing the headliner (thanks to their fortuitous discovery by the former frontman of the band Soul Coughing). The music may have been simple and direct, the arrangements consistently reliant on that ever-present beat, but the band's at times jazzy delivery was assured, professional, accomplished. It may have been a tape loop, but it was that medium-tempo disco vibe that lingered as the night wore on and eventually ended: a 21st century dustup of something that presaged punk music, creating yet another combination all its own.