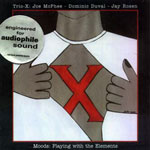 I'll bet anyone $50 that the wonderful multi-instrumentalist Joe McPhee could play beautifully on an old length of PVC pipe. Any takers? You'd lose. I've seen him do it, and there were at least thirty other witnesses. Neither PVC nor any other sort of plumbing material is listed on this Trio X release, and silver-haired tunes like "Stella by Starlight appear in the track list, but don't worry, this is no standard issue jazz CD. It's what you'd expect—including the surprises—from McPhee and his first-rate associates.

McPhee is best known as a pocket trumpeter and he employs that powerful, diminutive instrument here, along with flugelhorn and tenor sax, the latter played with sometimes squonky, sometimes velvety authority. The session opens with a soulfully blown, slightly melancholy blues improvisation, then shifts into higher gear before an intermezzo of inspired treatments of familiar material. Trio X gives the standard "Stella, Monk's "Evidence, and Ornette Coleman's "Lonely Woman just the right mix of realism and abstraction.

Dominic Duval's bass work is warm and unobtrusive, supporting and propelling without fighting for attention. Jay Rosen contrasts this with a brash, clamoring handful of a performance, on many of the pieces almost overpowering Duval's decorous presence. McPhee, a somewhat self-effacing personality, nevertheless manages to hang onto the spotlight for most of the record and he does not disappoint. Musically the trio explores well-travelled territory, and nothing stylistically new has been attempted or achieved here, but for all that, it's as fine an artistic statement as you'll find in recent issue.