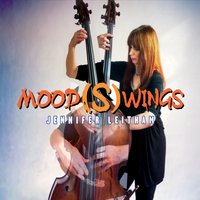 One of the rules of thumb in jazz is that hardly anyone ever looks forward to a bass solo. Rules, however, were made to be broken, and a case in point is multi-talented Jennifer Leitham whose solos on Mood (S)wings are nimble, well-crafted and consistently engaging—in other words, worth looking forward to. Not that anything less would be expected from someone who has been at the top of her game for more nearly four decades and performed with a who's who of jazz luminaries from Mel Torme, Peggy Lee and George Shearing to Woody Herman, Benny Carter, Louie Bellson and others too numerous to mention.

The fact is, Leitham not only plays a mean left-handed bass but sings as well (on five of eight tracks), thus accepting the risk of being labeled a singer who also plays bass instead of a bassist who also sings. She rises above that by displaying her virtuosity as an instrumentalist at every turn, whether soloing or lending strong, inflexible support to pianist Andy Langham or her special guests: guitarist Jamie Findlay (his own "Glad Tidings," Lennon / McCartney's "You Won't See Me") and ukulele master Jeff Linsky ("Don't You Ever"). Leitham sings on that one, as she does on "The Masquerade Is Over," "You Won't See Me" and two more of her compositions: "Riverside Romp" and "My Heart Had Wings."

Leitham's lyrics are clever and cogent, while her spare, unpretentious style reminds one of a higher-pitched Dave Frishberg or Giacomo Gates. The chops get a vigorous workout on the shuffling "You Won't See Me" and the slow-paced "Masquerade," on which Leitham sings on-key and with a disarming personality. Although she's obviously no Sinatra, she makes the most of what she has going for her. And of course she shines on bass, setting an unerring compass for Langham, drummer Randy Drake and the others. Besides Findlay's "Glad Tidings" (on which his guitar adds pleasing color), the instrumental selections are Clare Fischer's seldom-heard "Cascade of the Seven Waterfalls" and any bassist's charming companion, Oscar Pettiford's melodic "Tricotism" (on which Drake has a chance to flex his muscles).

While Leitham is at home in any setting, the trio format suits her fine, and Mood (S)wings is yet another example of her singular and inclusive artistry.

Riverside Romp; Cascade of the Seven Waterfalls; Don’t You Ever; My Heart Had Wings; Glad Tidings; The Masquerade Is Over; You Won’t See Me; Tricotism.