By BRUCE LINDSAY
September 4, 2010
Sign in to view read count 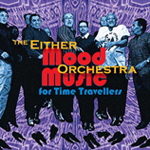 A sense of calm and well-being pervades the Either/Orchestra's Mood Music For Time Travellers, investing its ten tunes with a warmth and good humor that makes the music immediately accessible, and also hides some of the compositions' complexities. It's a calm that comes from experience and confidence, this album celebrating Either/Orchestra's 25th year.

The Massachusetts-based group, led by saxophonist and composer Russ Gershon, has a strong reputation for its work with Ethiopian musicians on albums such as Ethiopiques 20: Live In Addis (Buda Musique, 2005). Gershon refers to Mood Music For Time Travellers as "our first album of 'American' music since 2003," and despite this Ethiopian connection it's American influences, especially Latin American, that predominate.

Gershon's "The (One of a Kind) Shimmy" kicks things off in irresistible style—it doesn't just shimmy, it shakes a bit too, thanks to percussionists Pablo Bencid and Vicente Lebron. The horns have a beautifully mellow tone, one which characterizes much of the album's sound. "Coolocity" is another fine example of a slinky and danceable tune that arises from the superb combination of horns and Latin percussion, with the added finesse of pianist Rafael Alcala's bright, metallic sound. "Ropa Loca" also displays a strong Latin influence in its rhythms and Joel Yennior's rich-sounding trombone solo, while the urgent, percussion-led "Latin Dimensions" would be right at home on the soundtrack to a black and white crime caper movie.

"Portrait of Lindsey Schust" is a more laidback and romantic tune, with a very subtle reggae influence apparent from Bencid and bassist Rick McLaughlin. Yennior's "Suriname" brings all of the Either/Orchestra's influences and talents together in this gorgeous performance of a lilting, groove-laden and slow tempo tune. Alcala's piano solo is right on the button—controlled but swinging, a perfect reflection of the horn section's own approach—and Kurtis Rivers' baritone sax solo doesn't waste a single note.

At times, the Either/Orchestra's mastery and control makes everything sound a little too easy—a little more tension, or a slight sense that the musicians are taking risks, might add a touch of drama. But this is a rather petty criticism; these are fabulous musicians, performing terrific music with great creative skill. They ensure that the mood created by Mood Music For Time Travellers is a good one: a mellow, chilled and happy mood.