By IAN PATTERSON
February 21, 2011
Sign in to view read count 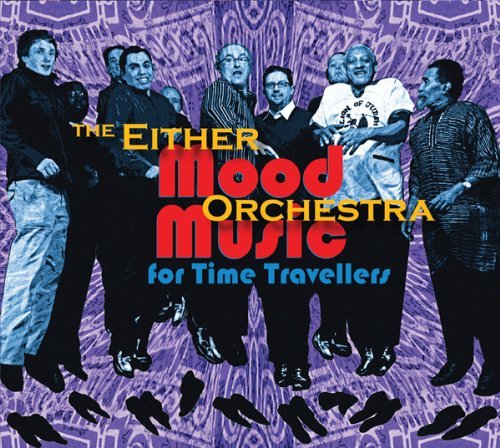 As saxophonist/founder Russ Gershon has noted, the 25-year history of the Either/Orchestra constitutes a quarter of jazz's eventful history. The changes in this large ensemble's music in part reflect wider trends and at the same time are the results of an organic evolution as members have come and gone. In the early years, Gershon plumbed the jazz cannon for repertory in addition to composing original material. However, arrangements of songs by Bob Dylan, Bing Crosby and Robert Fripp pointed to an eclectic and open-minded musical vision.

The Either/Orchestra's unlikely foray into Ethiopian music for most of the 2000s was in vogue with the increasing influence of world folk music in jazz and brought the band widespread critical acclaim. Mood Music for Time Travellers is the Either/Orchestra's first recorded outing in six years and finds the 12-piece band swinging its way through a dozen original compositions in what Gershon describes as a return to "American music."

Perhaps music of the Americas would be more fitting, as Dominican-born conguero Vicente Lebron and Venezuelan drummer Pablo Bencid bring strong Latin flavors to the arrangements. "Ropa Loca" is a hybrid of the hot and sweet schools of Latin big bands with intermittent brass riffs bringing a mambo vibe to a catchy number which features mellow solos from trombonist Joel Yennior and the leader on soprano. "Latin Dimensions" is a percussive workout, subtly infectious as opposed to pulsating fireworks. On this latter number the brass section is relegated to a cameo role.

In spite of the many options and combinations at his disposal, Gershon is not afraid to strip things right down; the Duke Ellingtonian rumba of "Beaucoups KooKoo" is essentially a rhythm section outing, with elegant solos from baritone saxophonist Charlie Kohlhase and charter member and trumpeter Tom Halter.

Pianist Rafael Alcala's "Watermelon Man"-like motif swings "The (one of a kind) Shimmy" over a solid bass and trombone groove while nicely layered brass engages in call and response. The impressive Alcala also brings atmospheric Hammond B-3 waves to "Portrait of Lindsey Schust." Halter and Gershon both cut confident solos on a standout track of imaginative arrangement and powerful ensemble playing.

The African connection hasn't been overlooked, either: the impressionistic "35," by quietly authoritative bassist Rick McLaughlin, integrates Ethiopian modes with jazz harmonics to great effect. Elsewhere, an infectious James Brown/Fela Kuti groove inhabits the funky "The Petrograd Revision," with Bencid keeping a water-tight beat. The other McLaughlin composition, "History Lesson" also tips a wink at Kuti and is the longest track, at nearly twelve minutes.

This is the Either/Orchestra's eleventh release in a quarter of a century, which is a fairly healthy return. That it finds the band in such rude health after so long augers well for the next chapter in its history. Milestones are significant, but the most important thing, no doubt, is that the Either/Orchestra has established itself as a fairly unique jazz institution, and as Mood Music for Time Travellers demonstrates in abundance, one with a stirring personal voice.