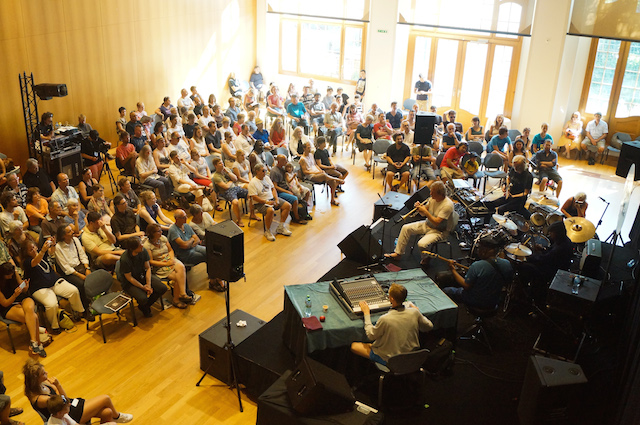 By PHILLIP WOOLEVER
July 12, 2016
Sign in to view read count

One of the most rewarding experiences at the Montreux Jazz Festival is attending one of the many free workshops conducted by a wide range of jazz and production masters. Many showcases are led by musicians with shows scheduled on or near those afternoons, so they are in high performance mode. Participants are often top ticket attractions, many of them headlining sold-out shows.

The location at Petite Palais is just a few hundred footsteps along the beautiful Geneva lakeside to the neighboring convention center's interior area where most shows occur, so it's somewhat surprising that among thousands of music aficionados, there isn't more public curiosity, considering the numerous fans with deep musical connections.

As it is, the resplendent room is usually filled to near a capacity of approximately 130 people. Perhaps the relatively early, mid-afternoon or evening start times don't encourage those regrouping from the bustling, early morning revelry that is Montreux jazz.

For the 2016 gala, presentations are set on almost every day except the opening, a running total consisting of sixteen days with 26 unique sessions. Subject matter runs a full gamut including instrumental technique, improvisation, panel discussions, history, and film.

This year's workshop calendar blasted right off with Charles Lloyd, Eric Harland, and Reuben Rogers then didn't let up in a program that includes Al Jarreau, Marcus Miller, and what should be amazing insights along memory lane with festival figurehead Quincy Jones.

Additional presentations include Music and Films by Patrizia Lombardo, Looping and Scratching by Jonas Messerli, and Tunisian artist Amine M'raihi demonstrating the oud, an important instrument in Arabic classical music.

More academically oriented lectures have featured "Life, Brains, and the Arts" by USC professor Antonio Damasio, a history of electronic instruments by Raphael Parisod and a presentation on sight and sound in film by professor Patrizia Lombardo. Jason Moran previously moderated an intriguing look inside the films and recordings of Fats Waller.

The program turned into a free mini-concert, which came as some relief to those who couldn't get tickets to the sold-out, official gig.

Shakespeare demonstrated the numerous possibilities of timing variations with a wonderful, one note song, adding altered dimensions to the tonal landscape while the enchanted audience considered Molvaer's observations.

"It's the kind of dub where you jump in and out of the electronics," noted Molvaer. "It's about meeting through the music, mixing something they made with something I made."

A few years back, Ian Anderson's flute workshop was a highlight of the entire festival, featuring, among other delights, an engaging player with multi-personalities and some illuminating personal insight from Jethro Tull's front man.

Sadly, that workshop was one of the final Montreux events a cheerful, harp blowing Claude Nobs participated in.

It certainly seems as though festival organizers are committed to maintaining Nobs' vision. That means many more free workshops and that means the enjoyable, educational music scene will continue to thrive.

Any stroll down the Montreux waterfront's vibrant array of musicians and merchandise is usually an interesting scene. Those whose steps lead them to the jazz workshops will very likely share in one of the festival's most unique and lasting treats.