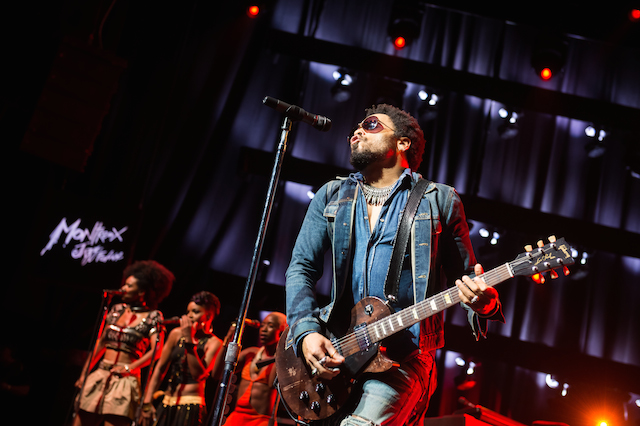 Sometimes a performer's most primary appeal is obvious. In tonight's case that appeal was verified by a large percentage of fired-up females, wedged in for Lenny Kravitz's sweltering, sold-out set in the grand Auditorium Stravinski.

The enduringly fashionable Kravitz and his fans brought more progressive wardrobes than you'd normally see for typical Montreux attire, in a typically glamorous scene along glistening sunset shades of a turquoise Lake Geneva. The four thousand in attendance got what was, by usual arena standards, a relatively intimate show.

"Montreux is such an amazing institution, thank you for having us," smiled Kravitz as he blasted into seven-chord rock. His excellent, 10-piece backup group played like an ensemble that meant to further secure their sterling, if less than groundbreaking, reputation.

A classic concert performance on a major stage isn't only about an artist's musical or compositional skills. If vocal talent or playing an instrument were all it takes, some acts between the large auditorium, free park or competition shows might have justifiably switched locations and billing.

Other important factors like image, creativity, charisma, and often, sex appeal come into play when determining what acts will sell tickets. Whatever Kravitz's formula is, it apparently works very well.

With confident control of all the aforementioned qualities, and in abundance, Kravitz charged out and delivered a surprising, greatest hits set that ranks with the best in recent Montreux history. Since Kravitz probably could have garnished acclaim just for showing up and looking cool, his contagious energy was even more impressive.

The opening "Frankenstein" kicked off an inspired, communal high that rarely wavered. The band barreled seamlessly into a slightly modified "American Woman" that strutted along an effectively slowed bombardment of triple bass beats.

Kravitz hit some tasty leads but mainly played rhythm, with front and center solo support from his longtime colleague, ace guitarist Craig Ross. Along with masterful Cindy Blackman-Santana on thunder sticks, there was plenty of star power in the band. Kravitz gave an example of what showmanship is all about as he bonded with the swaying swarm.

"It Ain't Over Til It's Over" sounded like a metallic Motown anthem as Kravitz crooned old school soul with the best of them. Near the front of the stage, hundreds were squashed into an irresistible, sardine can-type dance as people squeezed through the door for just a peek at the party. The floor was hot and tight but nobody seemed to mind the immoveable mass, at least until they wanted room to breathe.

Electric ax was tonight's weapon of choice, but many moments of this dance party featured horn as the primary instrument. For credit where credit is due, it should be noted that Kravitz's supporting brass crew (Ludovic Louis on trumpet, Michael Sherman and Harold Todd on Saxophones), an enduring staple of his act; got a more pumped up response from the crowd than some better known horn sections have on the same iconic stage, over the years.

Of course, it didn't hurt the brass's cause that their approximately fifteen to twenty minutes of horn solos were sandwiched between barn burners like "Dancin' Till Dawn" and "I Belong to You," choreographed before a happily writhing crowd full of ladies loving Lenny.

During the ballad "Sister," a pair of gals at stage left perused their electronic gallery of nude men, between snapping selfies with Kravitz in the background. Thus, benefits of technology were further expanded. Hunger games, indeed.

One grey gentleman was heard to mumble, seriously, what sounded like "He's the devil," probably after he watched his date melt in a way he'd never seen before.

When Kravitz took a long, well-practiced Hey Jude-type stroll into the back of the auditorium on "Let Love Rule" it was one of many non-beefy highlights. The entire crowd seemed to sing along, while official backing vocalists Erike Jerry, Jessica Wagner-Cowan and Yahzarah Tony St. James provided icing on the cake of chords.

There was another nice, personal touch when Kravitz introduced the band by first name only at the finale of the two-hour extravaganza. Everyone got a last chance to stretch out on a jam-extended "Are You Gonna Go My Way."

There are rock stars and there are true stars. Put those together and you get a personality like Kravitz. Mass appeal is sometimes undervalued when appraising talent. It's no easy feat to consistently create compositions that capture widespread public acclaim, and anyone who doesn't recognize the popularity of songs like "Fly Away" isn't being realistic about musical markets.

There are, indeed, usually many factors that contribute to the sum effect of a concert and determine consumer response. If the delight on people's faces meant anything, this was a great show in many ways.

Anyone who minimizes the importance of a US image as "cool" around the world has not been paying enough attention to global trends or shifting perceptions. Ambassadors come in many fashions. Multi-cultural rock is cool. Letting love rule is cool. Lenny Kravitz at Montreux Jazz was definitely cool.

There were some rough spots during a raucous warm-up by Benjamin Booker, but that had nothing to do with a lack of talent or effort.

When Booker dropped to the floor and testified in a whisper after initial, bayou Blue Cheer type riffs it was effective. Other times, a bit more vocal volume would have better served his delivery in the mix of heavy feedback.

When they went traditionally acoustic with Spoto on violin and Norton on mandolin, it was an engaging Cajun moment. When Booker motioned for the crowd to stop or start clapping, it looked like he had the half-filled auditorium, about two thousand people; in the palm of his hand.

ADVERTISEMENT
Then, after the audience failed to meet expectations during a requested sing-along the show started to fall apart, as Booker scolded them about clapping if they hadn't sung.

So far, no one was questioning the band's skill, intensity or commitment. Some in the crowd were not impressed by Bookers' jacked-up, trance style delivery and could be seen leaving, but the general response was favorable, and growing.

"This is as much about you as it is about me. If you don't want to participate you don't have to be here," huffed Booker. That triggered the crowd to hoot back, and when he immediately flipped them off in an extended response it ignited a mini-firestorm amidst high-brow shores.

It was probably the most authentic rock n' roll moment seen here in over five years. Still, edgy doesn't have to mean difficult. Misplaced energy is still misplaced, and a waste of energy.

The trio got a little too close to Nirvana cover band territory sometimes, but overall their hour on stage made a powerful impression. An informal exit poll indicated a 50-50 split on audience appreciation. Hopefully, Booker saw Kravitz's subsequent gig, a master class in working a crowd.

With the meltdown, Booker might not have made the most of a considerable opportunity, but as far as honest intensity goes, it was a very impressive statement. You can have all the sweet home type Alabama stuff you want. This is a band that was shakin.'

Auditorium Stravinski wasn't the only venue that rocked tonight. With very good sight lines and tickets generally around a third the cost of bigger shows, the Jazz Lab is the preferred venue according to some festival veterans.

The Jazz Lab is the most fan-friendly of the revamped spaces, because much was left alone in the wide, cavern-like standing area that accommodates two thousand. That's about how many people danced throughout co-headlining sets by James Blake and Hot Chip. Outside, this looked like the show generating the most ticket scalping action, but that could be due to availability. The Chips closed with such an infectious take on Bruce Springsteen's "Dancing in the Dark" that you had to walk past at least a couple water front DJ stands to get the hook out of your head.

For premium shows (average cost well over 100 dollars), the frequently too-cramped Jazz Club is the least appreciable venue of the convention center. Roomy tables up front are popular and reasonably priced, for Switzerland hot spots that is; but the cheaper, slightly elevated platforms or standing area toward the rear offer no bargain, with obstructed sight lines in the recently remodeled performance space.

Acoustically however, the club's sound is equal to anywhere. Sixteen solo speakers balance throughout the hall, supplementing group specific rigs. Unfortunately, people farther back can't see nearly as well as those in front, and there were numerous early exits as a probable result.

Insufficient confines were a problem with each of tonight's generally well-received acts. For a majority of fans, including those stuck outside in line waiting for vacancies, a larger hall may have been better. The concept of an intimate show is fine, but why sell other distant seats at immodest sums?

The reggae dub duo's collaboration with trumpeter Molvaer was a stirring summit of electronic experimentation, with guitarist Aarset and effects wizard Delay (Sasu Ripatti) rounding out a unique unit. A moving experience, but with too little room to move.

Fortunately there was a chance to see the group earlier in the afternoon, at one of the festival workshops, titled "Jamaica Meets Scandinavia." Comparing the evening's cramped conditions to the afternoon's open contact, it strongly reinforced the habit of attending every workshop possible.

Earlier, The Two, an acoustic, Mauritian /Swiss duo, produced a sound so clear it was stunning, as if you were Ant Man, inside a hollow bodied six string. Too bad the view was about the same. A quick walk from the bandstand to the exit indicated that people in the front were enchanted, and people in the back were distracted.

Beautiful weather shined over a diverse crowd, who shared a discernable celebratory mood. There were cultural attractions and lakeside sights galore for those who couldn't obtain concert tickets, with free live acts in the Rock Cave, Studio and El Mundo club scene adjacent to the main showrooms. As usual, the wonderful Concert in the Park series had a day-long outdoor program, including excellent groups like the Stanford Jazz Orchestra with Jon Faddis, that kept the area filled by satisfied spectators.

A steady flow of fans rotated picnics on the slight, hillside area along scenic walkways, parks and playgrounds. Montreux Jazz is this artisan city's nicest seasonal musical gathering, and one of the best long-standing free programs to be found anywhere.

European festivals continue to grow despite, or maybe because of, instability in the region. New locales compete for social recognition and crucial, commercial tourism revenue.

During a coincidental restructuring period prior to and then, especially, following the unexpected death of iconic founder Claude Nobs, there were legitimate questions about MJF's current or future status on the evolving summer circuit.

From the way most things appeared for a few days at MJF '15, heading into their 50th anniversary celebration this spectacular, summertime scene at Montreux remains atop the festival food chain.