Touring North America is tough for any group, but it's even more of a challenge for Norway's Jaga Jazzist. Being a nonet would be enough, but when you're bringing enough instruments to open a small music store, and an additional three people (including front-of-house sound, monitor board and road manager), it starts to sound a little more like rock and roll. And, despite Jaga's left-of-center music- -largely composed by reed man/guitarist Lars Horntveth, an irresistible combination of minimalist tinges and Frank Zappa idiosyncracies, rock-heavy beats, complex harmonic underpinnings and knotty but unmistakable, anthemic melodies—its tours are rock and roll...well, at least, sort of. 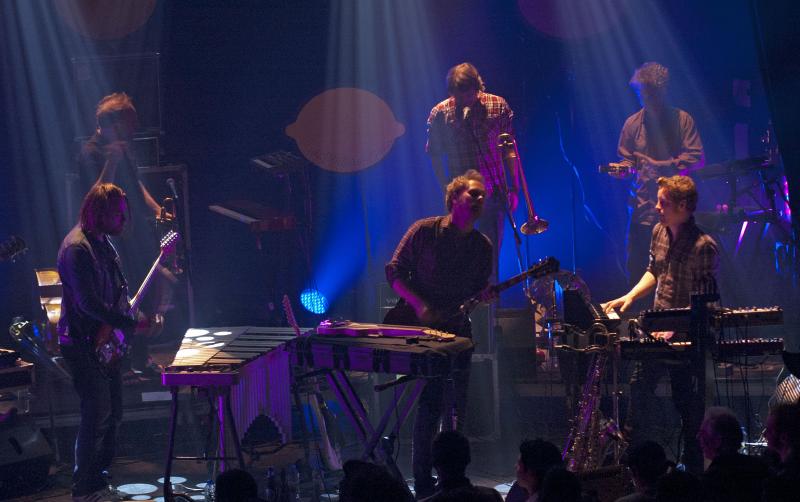 Certainly the sold out Club Soda, with a standing room capacity of about 700, leaned heavily on a younger demographic, though there was no shortage of gray/no hairs, most of them from the progressive rock crowd that has come out in increasing support of the group since the release of One-Armed Bandit (Ninja Tune, 2010). Drummer/spokesperson Martin Horntveth (Lars' brother) spoke, after the 100- minute set, about people driving as much as eight hours to catch one of Jaga's shows—some, even, who were making the trek to catch the group on multiple shows in a 10-city tour that has crossed the continent from west to east, starting in Los Angeles and ending in New York City, with stops in San Francisco, Seattle, Vancouver, Minneapolis, Chicago, Toronto, Montreal and Ottawa along the way. There simply aren't many acts in the jazz world where you can find such committed fans.

But as much as a Jaga Jazzist show is a rock and roll experience—loud and powerful, driven by Martin Horntveth's thundering combination of John Bonham power and Billy Cobham virtuosity—there's so much going on beneath the covers of Lars Horntveth's writing that its almost hard to believe, at times, that the group is as popular as it is. Not that the group makes a lot of money (not, at times, as if they make any money), but while Jaga's lineup has gradually shifted over the years, it still retains its core constituency, artists who make Jaga a priority whenever the Horntveth siblings—include sister/tubaist/flautist/singer Line, who had to skip this tour as she's a couple of months away from having a baby—figure it's time to reconvene. Trumpeter Mathias Eick, for example, is a star on the ascendancy, with two albums on ECM including the recent Skala (2011), but when Jaga calls, he's there.

And why wouldn't he be? His own performance at Jazzahead in Germany, earlier this year, was certainly enthusiastically received, but little compares to the kind of craziness Jaga stirs up in its fans, but especially in Montreal, where audiences are world-renowned for their over-the-top enthusiasm. With 700 people on their feet, screaming, whistling and treating Jaga like rock stars, it's hard to deny that what Jaga doesn't recoup financially on a tour like this, it more than makes up for in "feeling the love."

Focusing heavily on music from One-Armed Bandit, Jaga opened with the "Steve Reich meets Bernard Hermann" vibe of "Toccata," also provikng its mettle at constructing sets filled with peaks and valleys, but mostly peaks, where the lighting was surprisingly well-synched, given that it was a house engineer at the club (this is the first time Jaga has toured without their own lighting man). The use of green laser light beams, sent out from the stage into the crowd and tying in, beat-for-beat, with the music, demonstrated the kind of in-the-moment decision-making Jaga can make when on the road, to adapt to the venues in which it finds itself. 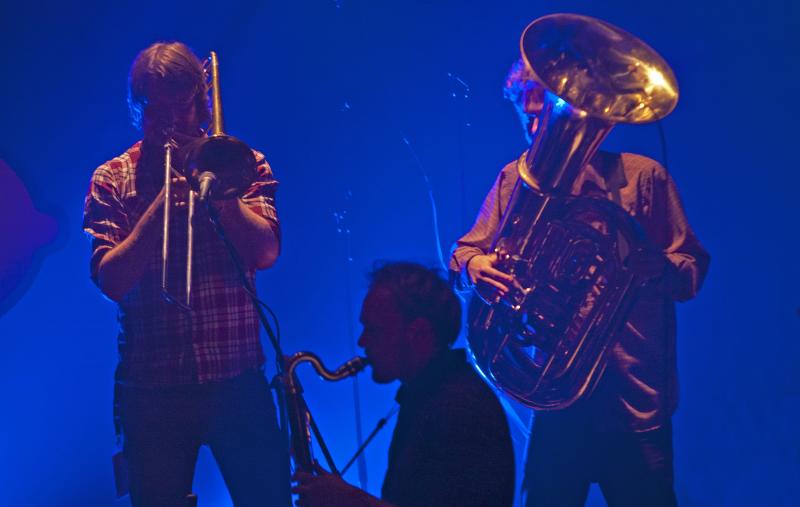 While the music is finely detailed—and no small challenge to perform, given that, with 18 arms and legs at most Jaga has to translate the 96 tracks used in the recording of One-Armed Bandit- -there is also enough space provided to focus on soling from some of the band members. Eick got an extended solo, late in the set, which drew screams of approval from the audience—though he proved equally powerful when he put down his trumpet and picked up a double-bass—while Øystein Moen's synth tones were, in a word, nasty, drawing from the same outrageous sound worlds that he explores in his more avant improvising trio, Puma, with guitarist Stian Westerhus and drummer Gard Nilssen. The two Horntveth brothers were constant focal points: Martin, beyond his absolute engagement on the kit, a great spokesperson who whipped the already energized crowd into a greater frenzy; and Lars, who took a soprano saxophone solo, mid-set, that belied his general tendency to focus more on structure than freedom.

Andreas Mjøs never took an actual spotlight, but remained quietly charismatic—sharing center stage with Lars Horntveth, and moving constantly between guitar, synth and, in particular, the vibraphone that is particular marker for the group's sound—while trombonist Erik Johannessen (picking up some of the absent Line Horntveth's vocal lines on "Book of Glass"), Even Ormestad (spending almost as much time on keys as he did electric bass), guitarist Marcus Forsgren (no longer new, having been with the group for over a year now, performing last year at the Konsgberg Jazz Festival), and Line's unnamed replacement all contributed to a sound that can be described in terms of its many influences, but is ultimately best described, simply, as Jaga Jazzist music.

This ain't your granddaddy's jazz, but with no shortage of jazz references in spirit if not letter, this is music that fits within the broader sphere of jazz for a younger audience. On a roll after its brief hiatus following What We Must (Ninja Tune, 2005), it's clear that Jaga Jazzist has fully recaptured its momentum and continues to build its audience.