By MARK SULLIVAN
January 19, 2015
Sign in to view read count 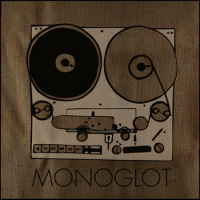 MONOGLOT comes by their band name honestly, a Swiss/German/Icelandic jazz/rock quintet based in Basel, Switzerland that speaks with one voice. Their music is all instrumental, and the improvisational elements clearly mark it as jazz, but the rock elements are strong as well. This is a contemporary group with one foot in the jazz tradition and another in the rock music they no doubt all grew up with.

While led by Icelandic guitarist and composer Kristinn Smári Kristinsson, in many ways the group is defined by the dueling saxophones of Fabian Willmann and Sebastian Von Keler. It's very much an ensemble sound, so sometimes the horns play together in a traditional jazz fashion (as on the opening tune "Out"); other times they will take turns soloing while the other accompanies (as on "78"); and they also play together polyphonically (as on "Grandpa's Song"). Kristinsson also gets lots of solo space, but even those sections bring the horns back into the mix before long.

At times the influence of minimalism (could be Philip Glass, Steve Reich, or a more local source like Nik Bärtsch's Ronin) is also audible, especially in the linked closing tracks "Time" and "Sofðu Unga Ástin Mín." These tracks give drummer Luca Glausen and electric bassist Samuel Sole a more prominent role: neither gets any solo space, but Glausen begins both tunes alone.

It is notable that the group successfully funded the final production of the recording via the crowdfunding site wemakeit. But it would be right at home on a label like Cuneiform, sharing a spiritual link with Canterbury rock/jazz fusion.