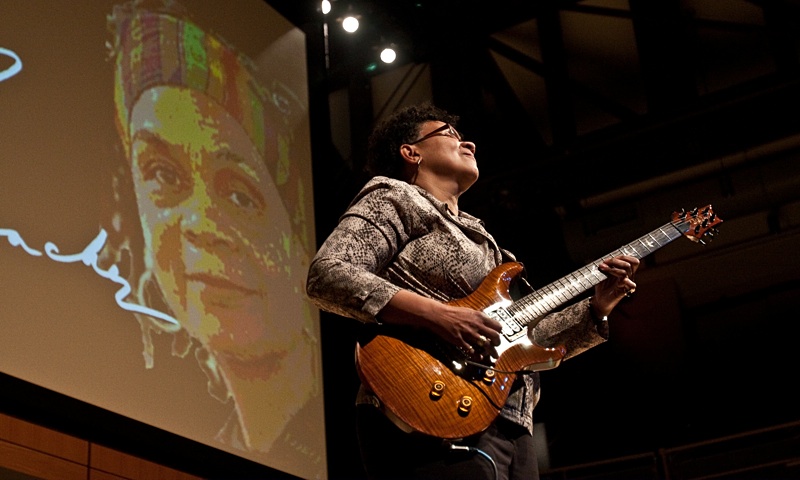 By SUZANNE CLOUD
October 8, 2013
Sign in to view read count
She's not working. She's too sick. And it hurts to the bone that she can't play the way she used to because she has Idiopathic Pulmonary Fibrosis (IPF) lung disease and is waiting for a lung transplant. Nobody knows what causes this scarring and stiffening of the lung tissue, hence the idiopathic part of the name, but as the lung thickens, breathing becomes labored and more difficult—oxygen has a hard time finding its way into the bloodstream. All researchers know is that it's deadly and grows progressively worse as time goes on. Life expectancy is between three and five years, according to the National Institutes of Health, and guitarist Monnette Sudler was diagnosed with IPF six years ago.

In 1997, Monnette Sudler told Philadelphia Inquirer jazz writer Karl Stark that she began playing a small guitar almost before she could talk, and he caught her that day before a West Philadelphia crowd at a local community center wondering aloud, "Do I dare to dream and take a chance the world is there for me? Maybe yes, at least a little piece."

Sudler grew up in the rich musical neighborhood of Germantown in Philadelphia and learned folk songs at her uncle's feet before falling in love with jazz. She went to the prestigious Berklee School of Music in Boston to study guitar and composition (later receiving her degree at Temple University), and quickly made her move into professional playing when she joined the group The Sounds of Liberation in the 1970s, which had two prominent Philly musicians in the mix—reedman Byard Lancaster and vibraphonist Khan Jamal.

This guitarist climbed steadily in her career, playing with such musicians as Archie Shepp, Cecil McBee, Grover Washington Jr., and Hugh Masakela, releasing the albums Brighter Days For You and Live in Europe on Steeplechase Records, appearing throughout America and around the world playing the Newport Jazz Festival, the Berlin Jazz Festival—anywhere they wanted a female guitarist with an attitude full of sass and an angelic smile to soften the edge.

In the 1990s, Sudler released the critically acclaimed and eclectic jazz projects Other Side of the Gemini, Time for a Change, and Just One More Kiss, an album featuring her poetry, which JazzTimes critic Hilarie Grey called surprising and unique... skillfully uses her arrangements as colorful backdrops and enhancements to her poetry.

But now Sudler is short of breath and on oxygen constantly. She is frustrated that she can't work, which is understandable since anyone this creative needs to play. Sudler told me, "All I'm doing is going to the doctor. My family and friends are supportive, but I have to watch myself that I don't get depressed. It's taken my confidence. I have some independence, but when you're on disability, there's nothing beyond that." 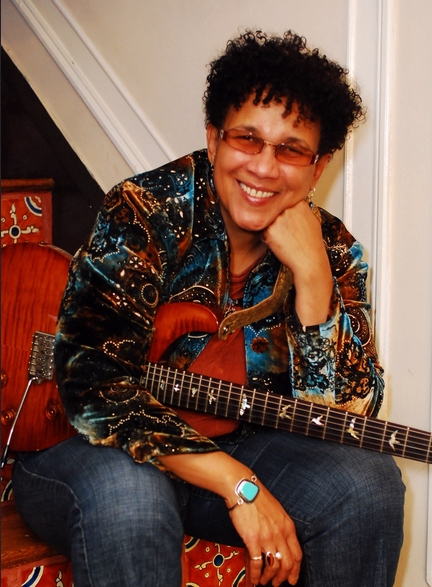 And so she waits for the transplant that will save her life. She waits and worries about the money that will be needed to make her well. And she's daring again to dream that the world will be there for her.

Everyone who loves her will be there to show their support and to raise money. The Monnette Sudler Fund has been set up for those who cannot attend by Jazz Bridge, a nonprofit organization that aids jazz musicians in crisis.

Tax-deductible donations can be given at jazzbridge.org or anyone can send a check to Jazz Bridge, 3008 Limekiln Pike, Glenside, PA, 19038. Designate in the memo that your check is for the Monnette Sudler Fund.