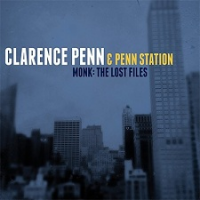 A well-established creative paradigm exists to justify Clarence Penn & Penn Station's recording Monk: The Lost Files. "Classical" music is often considered that music, composed long ago, that has stood the test of time, remaining viable to the public in recordings and live performance. These composers of this music tend to be Europeans from the last Millennium. It is the only logical jump to include American jazz composers like Duke Ellington, Charlie Parker and our focus here, Thelonious Monk as composers of "Classical" music.

In traditional Classical music, it is common for the performer (at least since Franz Liszt and Niccolo Paganini) to provide their personal spin on the music. Jazz, of course, takes this practice a step further in improvisation. Monk's music remains a rich loam of material from which new ideas spring from the minds of thoughtful and intelligent interpreters. Drummer Clarence Penn is such an interpreter. His approach is bold, yet respectful, not unlike Monk's himself.

Penn's approach to Monk is to challenge the composer and his compositions rhythmically, almost mathematically. Penn does not so much reharmonize Monk's material as he does re-accenting it. Penn moves the stresses in the music around. When listening to the opening "Well You Needn't" the listen will recognize Monk's craggy head, but it has been polished and made more regimented by Penn's arrangement. The remainder of the song is a dramatic updating. The bridge and soloing sections incorporate the spoken word and a Stanton Moore-like percussion environment, catalyzing a funky momentum.

"In Walked Bud" is transformed using the Fender Rhodes. Slowed down and performed with a deliberate attention to the piece's harmonic skeleton, pianist Donald Vega exposes the spirit of Monk's homage to his friend Bud Powell. An ethereal trio performance that shines like newly pressed steel. It is played as lightly as a ballad with Penn carefully outlining the rhythmic direction. Fractured are "I Mean You" and "Bemsha Swing" both featuring Chad Lefkowitz-Brown's tenor saxophone. The former is as regimented as a Jacksonian seizure while the latter takes on a relaxed post bop feel in portions. It is all Monk and all Penn.