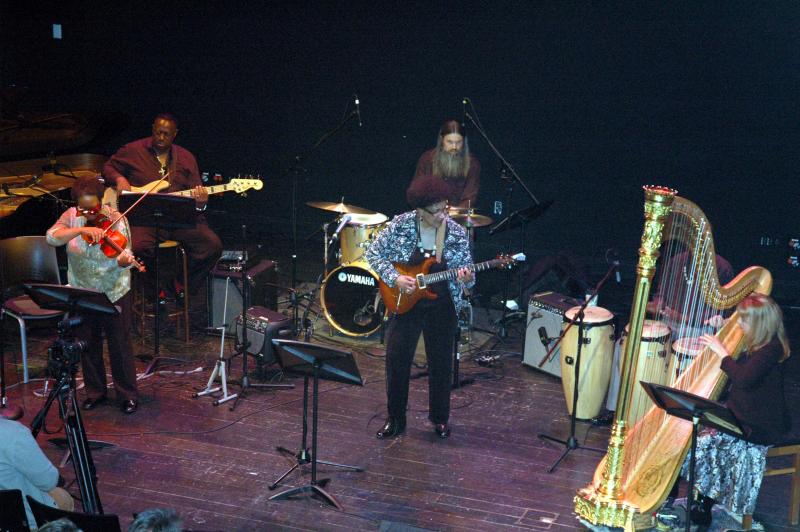 Monnette Sudler is a lauded Philadelphia-based guitarist with all the technique and finesse you could ask for, but she also has a way of moving around the strings which is expressive and soulful, communicating a story beyond words, touching the heartstrings. Earlier in her career, beginning in the 1970s, she moved up the ladder of success playing with the likes of Archie Shepp, Grover Washington Jr., Hugh Masakela, Reggie Workman, Philly Joe Jones, Odean Pope, Kenny Barron, and poet Sonia Sanchez, and hit the mark with several outstanding recordings as a leader. She then encountered tragic circumstances in her life, including a rare and debilitating lung disease from which she is now recovering. When I learned that she was performing at one of the Jazz Bridge "Real Book" concerts, I felt that I had to go re-experience her special gifts.

I was not disappointed. In this concert, she put together an unusual ensemble, with violinist Diane Monroe and harpist Gloria Galante by her side, and a multi-faceted rhythm section consisting of Aaron Graves, piano; Cedric Napoleon, bass guitar; Lamont Smith, congas; and Dan Monaghan, drums. The combination of instruments and talents was ingenious, providing a unique synthesis of blues, Latin, country, R&B, and classical sounds in a blend of sonorities that was both all of them and something unique in itself. In keeping with the "Philadelphia Real Book" series, which emphasized tunes composed by musicians with Philadelphia roots, all but one of the numbers were Sudler originals. The result was earthy, soulful music with the ethereal sound of the harp and the Latin beat of the congas giving it a sense of multicultural diversity.

With Graves' "moanin'" clusters on the piano, and Napoleon's flat-out R&B riffs and growls on the bass guitar, contrasting with Monaghan's flowing jazz rhythms spiced with a touch of rock, and Smith's hammered pace on congas for a background, Sudler, Monroe, and Galante poured out luscious improvisations, each with her own quality of sound and style. The effect was kaleidoscopic, amazingly coherent, and enjoyable, not an easy achievement considering its complexity. Monroe's violin solo in particular, during Pat Metheny's tune "James," thrilled the audience. It was a virtuosic combination of country, blues, and bebop. You had to be there to appreciate its nuances and sheer energy.

This was the final concert in a four part "Real Book" series that included two performances per night and a panel discussion in between, all based on the lives and music of Philly musicians. Many of the tunes came from the Philadelphia Real Book, a Jazz Bridge project in which compositions of numerous Philly musicians have been compiled in a volume which musicians can use as an easily accessible reference for their gigs. It is a gift to Philadelphia and the Delaware Valley that the Jazz Bridge continues to expand its noble three-pronged mission of excellent concert programming, jazz education, and caring and support for musicians in distress.