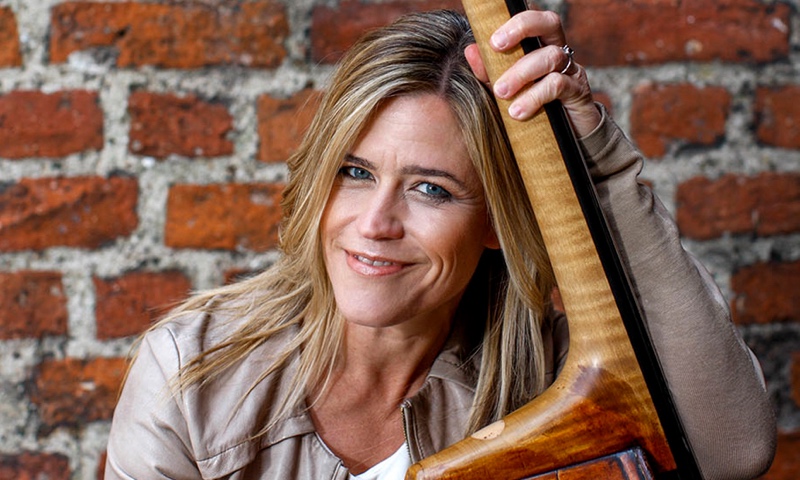 By PATRICK BURNETTE
November 3, 2017
Sign in to view read count

Korb is a jazzy jazz singer, with lots of hip flourishes to her vocalizing... As a bass player, she comes out of the Ray Brown school (rather than, say, Richard Davis or Scott LaFaro).

The Vanguard Jazz Orchestra recently celebrated its fiftieth anniversary. While its longevity is impressive, so is the wide-ranging the influence of the organization, which was started by Thad Jones and Mel Lewis in the mid-sixties. In far-flung Malmo, Sweden, for instance, there is a Monday Night Jazz Band that, on some Monday nights at least, still plays Thad Jones tunes and accompanies a variety of visiting artists.

Monday, October 29, the Band featured bassist/vocalist Kristin Korb. Esperanza Spalding's Grammy win helped popularize this particular hybrid, but Korb was releasing albums when Spalding was in the Nickelodeon demographic, so she predated the hype. Korb is a fantastic musician who can play compelling baselines while singing along with the notes she is plucking, or, if she chooses, while singing an entirely different melodic strain.

Korb is a jazzy jazz singer, with lots of hip flourishes to her vocalizing. She's willing to try out harmonically daring ideas that don't land one-hundred percent of the time but demonstrate her inventiveness and ambition. As a bassist, she comes out of the Ray Brown school (rather than, say, Richard Davis or Scott LaFaro). In her frequent solos, she played with formidable technique but always in a communicative and rhythmically propulsive way. Her lines were clear. She never "mumbled" on the bass. Her profile in the States has probably not been enhanced by a move to Denmark, but she is well-worth catching on a gig or recording.

The evening's two highlights were a duet with the Monday Night band's bassist on Ray Brown's "This Bass Was Made for Walking" (there were punctuations from the band, but the focus was on the bassists) and a solo rendition of Green Dolphin Street where she played a highly technical but indelible riff rife with harmonics on the A section and sang and scatted the tune. It was a tour de force of split-brain thinking and highly musical to boot.

The Monday Night Big band is excellent, with any raggedness having less to do with musical than blocking issues (every soloist's trip to the solo mic stage front seemed fraught with danger). Sound was iffy. There was some nasty feedback when Korb's bass mic interfered with her vocal mic, and the amplification made the piano sound like a collection of metal bars being smashed when the excellent pianist ventured into the upper octaves. (This problem was somewhat tamed in the second set). All in all, it was an excellent set of music and introduced this reviewer to a very compelling double-threat who seems fully committed to her art rather than searching for ways to popularize or dilute it.