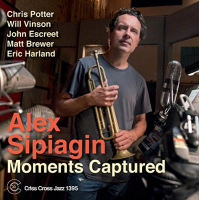 Trumpeter Alex Sipiagin's 12th outing as a leader for the esteemed Criss Cross label finds him returning to the three-horn front line format that he previously explored on the masterful "Destinations Unknown" (Criss Cross, 2011). Returning from that date are tenor giant Chris Potter and the unrelentingly groovy Eric Harland on drums. David Binney is Sipiagin's usual choice of alto players, (having appeared on three of his previous releases,) however this time around Will Vinson completes the horn section on alto sax. The remaining rhythm section roles are filled by keyboardist John Escreet and bassist Matt Brewer, both of whom are heard on electric and acoustic instruments and previously appeared on Sipiagin's 2015 release, "Balance 38-58."

This new music once again reinforces Sipiagin's status as one of jazz's top small group composers, with his distinctive style of intricate, knotty counterpoint, but with this release he explores new sounds within his compositional concept through Escreet's use of the Prophet 6 synthesizer. The instrument's importance in the music is immediately apparent on the opening track, "Evija Bridge." Beneath the complex and rhythmically-shifting horn line, Escreet adds further motion to the piece with wobbling chords from the synth and an extra layer of sound when the composition eventually gives way to a brief, but chaotic improvised section. After nuanced solos by Sipiagin and Vinson a written interlude leads into an astonishing solo from Potter. The solo is notable not only for Potter's signature crafty melodic playing, (which fans of his have come to expect,) but also for the fact Escreet doubles Potter's solo on synth via overdub. As David Adler points out in the excellent liner notes, this choice turns the improvised solo almost into a part of the composition itself, functioning rather like a soli in a big band chart.

Sipiagin adds another new element to his music in the form of Russian vocalist Alina Engibaryan, who contributes and performs the lyrics to the delicate and beautiful title track. The piece is a surprisingly simple ballad and once again features an interesting array of sounds from Escreet's synths. Engibaryan also appears on "Breeze," this time with wordless vocals reinforcing the main melody. The track is yet another interesting departure for Sipiagin in that there are no solos. Instead, the through-composed piece slowly builds with intricately woven horn lines that intersect with the tight, but restrained groove of the rhythm section, forming a subtly shifting and carefully balanced arc.

Many of the compositions mark an interesting step forward for Sipiagin, but there are still firm ties to his post-bop roots. "Bergen Road" finds the sextet on all acoustic instruments for the duration, and most recalls the intense post-bop compositional style and thrilling interplay of "Destinations Unknown." "Mike's Blues," is perhaps the best mix of old and new, with Escreet sounding off on acoustic piano and synthesizers. Sipiagin notes that the only real relation the tune has to a blues is its 12 bar form, and explains that the melody was built around a single phrase from one of Michael Brecker's solos. It is fitting then, that Potter is the first to solo, as he is considered by many to be the spiritual successor to Brecker, and he certainly lives up to that consideration with one of his finest solos on the record.

Overall the album is an interesting and largely very successful step forward for one of jazz's premier composers and improvisers. The Prophet 6 synthesizer offers a limitless range of new textures and colors that Sipiagin seamlessly incorporates into his established compositional palette and further augments the music with occasional vocals. The inclusion of lyrics in only one track feels slightly out of place in the context of the mostly instrumental and conceptually abstract nature of the rest of the music, but as a whole the album is an interesting new perspective on Sipiagin's distinctive compositional style.