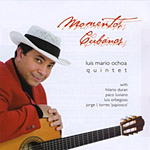 Guitarist/vocalist Luis Mario Ochoa showcases his new acoustic quintet on his fourth recording. It's a departure from Cimarron, the nine-piece ensemble he calls a Cuban dance band with a jazz sound. Ochoa continues to find the groove as a composer and arranger as he mines Cuban and Peruvian music with all their attributes for thoroughly enjoyable listening.

Ochoa sets the mood with the sparkling "Simbiosis." The melody is catchy and Ochoa rides it on the guitar with round, juicy round notes. His parlaying of the melody is vivid and he lends it that extra dimension with emphatic voicing and short, fleet runs. But where would the music be without the congas? Jorge Luis Torres "Papiosco" (congas) keeps the beat singing. With Hilario Duran illuminating the song on the piano, this is quite irresistible.

"Perla Marina" is a beautiful song composed by Sindo Garay, one of Cuba's leading songwriters. The title translates to "Marine Pearl" and is a fine showcase for Ochoa's singing. He is a passionate singer, his enunciation and phrasing strong and packed with emotional power. He is also the troubadour who adds to the soul with his guitar. David Virelles completes the lure through the eloquence of his harmony and phrases on the piano.

"Momentos Cubanos" is another joyful paean to Cuban music; a wonderfully happy and frisky tune. Ochoa gives it a traditional Cuban flavor adding son and changui rhythms. It is a mark of his skills as a composer as he weaves the rhythms into a seamless fabric.

Ochoa once again convincingly takes Cuban music, embellishes it with his imagination and comes up with an album that is difficult to ignore.