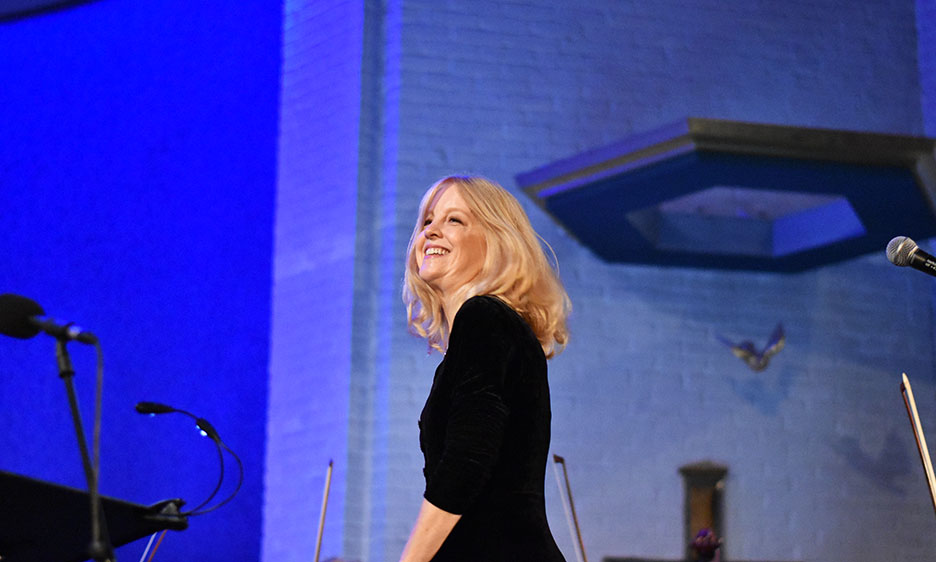 The Moldejazz festival is the second oldest in Europe—it was started in 1961, just one year behind Ljubljana, in 1960—and is still the most important one in Norway. It was here that Keith Jarrett and Jan Garbarek took their first steps in creating the Allentown pianist's "European quartet." It was here too, even earlier, that Garbarek came into contact with George Russell, the composer and pianist from Cincinnati who did so much to inspire jazz in Norway.

This was the fourth season of the festival directed by Hans-Olav Solli and on Sunday morning, just after it ended, the editor of the festival magazine FireFlate headlined with: "The best festival ever?!" It was July 22, a day that weighs heavily because it carries the memory of the 2011 massacre at Utøya. The atmosphere was particular and certainly not euphoric, so there is every reason to believe him: it was definitely a great year for the festival!

As always, in addition to the traditional roster of acts, the festival hosts an "Artist in Residence" who serves as a fulcrum for much of the program. This year it was the composer and arranger Maria Schneider. The festival also celebrates an iconic musician who has helped to put it on the map: this year, the double-bassist Arild Andersen. And finally, on alternate years, it has the task of launching emerging young Norwegian talents with the famed "Jazzintro" award announced by Norsk Jazzforum, as well as an annual scholarship given to the best young composer, "JazZstipendiat."

Let's start with the acts from this year's 58th edition: 28,000 tickets sold, 18 concerts were sold out. Ticket sales in terms of money were the best since 2009. 550 volunteers participated in the festival.

The line-up for the first week (which I missed) had some "big-time" artists. There were many Americans: the group "Hudson" (John Scofield , Jack DeJohnette, John Medeski, Scott Colley), David Sanborn, Donny McCaslin , Robert Glasper with Terrace Martin, Stanley Clarke. But local artists also appeared: Tord Gustavsen with his trio, the debut performance of Trondheim Jazzorkester & The MaxX, Ytre Suløens Jazz Ensemble and the trio Gurls . There were more rare finds too, though, such as Universal Indians with Joe McPhee, Allison Miller's Boom Tic Boom, and even some diversions into pop, with Van Morrison.

The opinion was unanimous: Maria Schneider did an excellent job and left an indelible mark on Molde. I was sorry to have missed the opening concert with Ensemble Denada, with guest Donny McCaslin and music arranged for David Bowie, which many journalists and critics viewed as one of the high points of the festival. I was able to attend the sublime closing concert in the cathedral, though, with the classical Trondheimsolistene ensemble and soprano Eir Inderhaug—which we'll talk about later. It was a successful collaboration, sealed by Maria's thanks to everybody who was involved in the project during its six-month gestation.

A giant of Norwegian jazz and a great musician who is respected and appreciated all around the world, Andersen is also an inspiration and mentor for a scene that is constantly growing and evolving. He was presented with the annual Molderosen award for helping to increase the festival's visibility. There's no question that he has brought something unique and particularly moving to life in his duo with the poet Jan Erik Vold. Finally, along with Dave Holland , he was one of the key people in the "Festivalakademiet" conference cycle organized by the scholar Bjørn Stendahl.

An important time for the Norwegian incubator: the jury (composed of double-bassist Ellen Andrea Wang, saxophonists Mette Rasmussen and Kjetil Møster, and pianist Jan Gunnar Hoff, and chaired by the Jazzforum representative Øyvind Skjerven Larsen, awarded the prize -of 200 thousand Norwegian kroner to the Young Young Jazz Musicians of the Year in addition to the Gramo grant of NOK 150,000 -to the newcomer trio from Trondheim (around 20 years old) I Like to Sleep (name is taken from a Thelonious Monk quote) Amund Storløkken Åse (vibraphone—following in his parents' footsteps: his father is the keyboardist and composer Ståle Storløkken and his mother is the vocalist Tone Åse ), Nicolas Leirtrø (baritone guitar) and Øyvind Leite (drums).

A million kroner went instead to the young pianist Alf Hulbækmo (the twenty-six year-old brother of a young star, drummer Hans Hulbækmo) for "JazZstipendiat," a scholarship that will allow him to collaborate for a year with members of his choice from the Trondheim Jazz Orchestra. The work he composes with them will premier at next year's festival.

Let's move on, though, to the music of the second weekend:

Thigs started with a bang with the seismic Paal Nilssen-Love, who was there with his Large Unit line-up in an XL format. It's a genuine big band that over the years has come into contact with other lands and cultures and has tried to embrace its strongest influences, primarily from Ethiopia and Brazil. The thirteen core members were thus joined by another ten for a world first—an XL version with an Ethiopian cast: Melaku Belay and Zenash Tsegaye (dance), Nardos Tesfaye (voice), Fasika Hailu (krahr), Habetamu Yeshambel (masingo), Mesay Abebaye (kobero), and others who were not announced...

The voice of Nardos Tesfaye got the ball rolling and gradually other members made their entry into a performance that was a mix of traditional, free and Ethiojazz dance and song. Quite unusual for Large Unit, I would venture to say: since I'm not familiar with the human and geographical background of the new members, it's difficult to give it a clear and understandable interpretation, but it was certainly a very striking and moving performance, and the different cultural layers were well integrated. Then, all of a sudden, a Brazilian musician appeared in the stands and launched into a berimbau solo as he made his way to the stage, accompanied by a few other Brazilian musicians. The ethnic register thus expanded and shifted to South America. And so it was that we were treated to a sort of ethnic/free jazz counterpoint in which the Ethiopian dance star Melaku Belay (Fendika band) took center stage for a long time, performing along with Large Unit or taking turns with it and the Brazilian trio, until the final guest of the evening arrived: the disrupter Terrie "Ex," whose forays served to mix things up even more.

Maria Schneider concluded her residency with one of the best concerts at the festival, aided in part by the location at the Molde Cathedral. It included two long suites of songs, both of which appear on the 2013 album Winter Morning Walks , composed for the soprano Dawn Upshaw and straddling the genres of jazz, contemporary classical music and Broadway musicals. The Carlos Drummond de Andrade Stories, based on English translations of the Brazilian poet's texts, started things off with a melodramatically flavored series. The Trondheimsolistene string ensemble is one of the most prestigious and accomplished in Norway, and the voice of soprano Eir Inderhaug also enjoys an excellent reputation: everything was indeed incredibly powerful and vivid; there were no hiccups and the overall impression was one of naturalness. It's no wonder that they decided to skip the last round of rehearsals. For this first suite, the only jazz musician was the pianist Olga Konkova, a Russian based in Oslo. For the second suite the ensemble was limited to the strings, accompanied by the jazz soloist Per Mathisen on double bass and Atle Nymo on saxophone. They performed the nine pieces from Winter Morning Walks , based on texts by Ted Kooser. The arrangements of both suites are beautiful and sophisticated; it was impeccably executed, exciting music. It was almost midnight and it was still light out in Molde.

This 58th Festival could not have ended better! Motorpsycho is a cult (rock) band in Norway that has always occupied a special place on the national jazz scene. They have also ensured the success of the historic club Blå in Oslo, thanks to collaborations with Jaga Jazzist, Supersilent, and in recent years, the guitarist Snah, with the band Bol&Snah. On this occasion the trio stripped down the wall of speakers and took on the challenge of playing with two of the most representative figures on today's scene in Trondheim: the violinist Ola Kvernberg and the multi-instrumentalist Kristoffer Lowe (formerly with Pelbo).

The concert kicked off with a version of the hit "Un Chien," a mix between ambient and industrial music, eventually leading into a veritable anthem to rock that lasted (the first piece alone) almost forty-five minutes. The repertoire was 100% Motorpsycho, with mixes of timbres intersecting richly with mellotron, violin, voices, and tuba from the two guests. The room was overflowing, and the doors were open: the public came and went freely; it felt like the festival's wrap-up party.

A collaboration between two greats from Norway's first golden age of jazz (early 1970s) that still maintains its freshness today. As a vocal reciter Vold is particularly gifted in musical phrasing, while Andersen, tweaking the sampling techniques he used in the album Electra, reinterprets Duke Ellington and revisits parts of his most recent repertoire in perfect harmony with the recitation. The texts were often funny and in Norwegian, prompting uproarious laughter from the audience in a room that was literally crammed.

A completely new band put together by one of Norway's most interesting young musicians: Christian Meaas Svendsen (double bass). He was accompanied by the Swedish saxophonist Anna Högberg, the Danish trombonist Maria Bertel and the Norwegian noise drummer Ole Mofjell. They performed a long suite inspired by the sonorities of the marine world: free-style forays projected us into the midst of a storm on the open sea, between whale songs and the calls of sea elephants and other marine animals. Svendsen, as always, displayed great technique and experimentation in exploring his instrument, at times accompanying his playing with a guttural voice. But the most striking performer was Maria Bertel, who between pedals and trombone plunged into the depths with unusual and moving low registers: hers was definitely the voice of the whale. Mofjell was a tireless hammer while Högberg was the only one to soar on the upper registers: the whistling of the wind perhaps or a flock of frightened birds. Here and there, a few classic, codified elements of radical improvisation came through. On the whole, a beautiful, intense performance sparked with interest and freshness. There were a lot of young people in the Storyville audience.