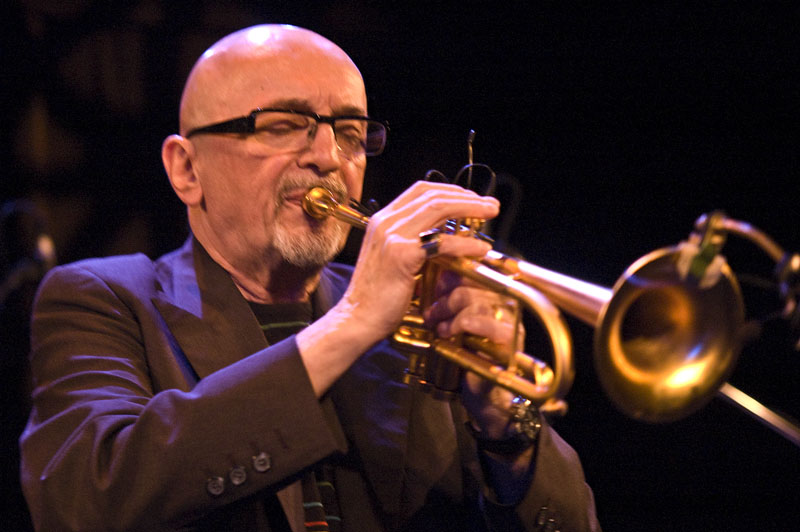 For the uninitiated, it can be somewhat disorienting to leave a concert at 10 at night and find it still daylight outside; even more disconcerting when an outdoor show complete with gut-punching bass begins an hour later. In most cities the noise police would be out to shut things down, but in the town of Molde, Norway, it's part and parcel of a six-day party that's supported by the locals as not only a major source of tourist revenue, but an opportunity to show off a jazz festival that, while it may take place in a small locale, is world class in stature.

With a striking balance of homegrown talent and artists from abroad, Molde Jazz manages to maintain the privacy required by some of its artists while, at the same time, making those who are more informal easily accessible. It's possible to find them outside a venue minutes after the end of a show, strolling down Molde's main street or part of the audience at one of the other shows running from four in the afternoon until just after midnight.

For the media the rules are simple: the first row-and-a-half of each venue is reserved for them, allowing easy access for photographers and a terrific view for writers. As is the case with many Norwegian festivals, there's a strong interest in seeing the word get out about Molde Jazz—not just throughout Norway, for which there's strong coverage including a daily paper devoted completely to festival coverage during its six- day run, but internationally as well.

But for most people attending the festival, these are secondary concerns. The primary interest is to socialize in a context that revolves around an outstanding roster of performances, but equally goes beyond the music. There's a sense of community and open friendliness that makes it possible to strike up a conversation with strangers on the street, in line for a show or inside a venue; and regardless of whether or not they're actually attending any of the festival's many shows, everyone is here to have a good time.

One of the beauties of Molde Jazz's artist in residence strand is the opportunity for its chosen musician to put on shows ranging from the heavily structured to completely unplanned and without a safety net—or something that's a little of both. Trumpeter Arve Henriksen may have done some advance planning in putting together percussionist Marilyn Mazur's immense percussion rig—with everything from Indonesian gongs and tympani to industrial metal containers, upended pails, congas, bongos and more—but that's as far as it went. The actual performance itself, consisting of three lengthy pieces and one encore, was entirely improvised with no advance preparation or discussion whatsoever. Leaving things entirely to chance can be risky business, but in the hands of Henriksen and Mazur, the result of their encounter was a mix of edgy free play, fervent pancultural grooves and no shortage of humor.

Mazur's rig certainly dwarfed Henriksen's own set-up, which—with three microphones, a small keyboard, a laptop and a couple of other pieces of electronics, took up a tiny portion of the 150-seat Forum's floor. Most amazing was that other than a small case of percussion instruments, Mazur—who coincidentally was last year's artist in residence—was encountering the majority of her instruments for the first time, something that only added to the spontaneity of the performance as the animated performer could be seen running around her array of percussion, almost like a kid in a candy shop, and certainly just as excited and happy to be there.

Henriksen began the show alone, on trumpet, with just the slightest touch of reverb to create an evocative landscape. Mazur, crouched down behind her rig, initially contributed only the most delicate of chimes, leaving Henriksen to build compelling melodies not unlike those of saxophonist Jan Garbarek, with whom Mazur released the equally spontaneous Elixir (ECM, 2008). As Mazur began to hit some of her largest gongs with a large mallet, creating viscerally deep tones that filled the room, Henriksen began blending in a sampled pulse that gave the performance its first of many rhythms as the two moved into harsher realms.

The interaction was quick, with each player acting in response while, equally, suggesting possible new directions—and both clearly having a great time doing it. Mazur's woodblocks were echoed by Henriksen's own percussive vocalizing, leading to both creating primal, ululating sounds. But as Henriksen began to sing a repeated 5- note pattern, encouraging the audience to join in, free improvisation between two became audience participation for many, as he managed to get the audience singing and clapping—creating a foundation for further improvisation by himself and Mazur and proving that spontaneous creation needn't be unnecessarily serious or internalized, where the audience is merely a passive bystander.

A second piece brought together elements of minimalism and a simple set of changes that Henriksen shifted in intervals to create an in-the-moment structure over which he layered lengthy trumpet lines, while Mazur continued to run from place to place around her rig, finally landing on the floor nearby Henriksen, where she began to play a clay pot that, in its utter simplicity, proved to be the most remarkable and flexible instrument in her vast array. Blowing into a small hole in the top, Mazur created her own pitch shifts by striking the pot with the palm of her hand, and sliding it along its side. That such a small instrument could produce such a big sound was uncanny, as Mazur created a visceral pulse over which Henriksen first layered sampled birds and frogs, but then turned things funky by playing two trumpets simultaneously, at times in unison, other times in harmony with each other.

As much as Henriksen's trumpet and electronics were a major part of the performance's soundscape, so too was his voice—ranging from pure falsetto to rapid-fire utterances and sharper screams. But it was on the last piece of the set, where he sang in English, almost naively, "I want to sing a little song/This is a song for everyone," that Henriksen and Mazur created some of the show's most beautiful moments. In contrast, during the duo's encore, Henriksen let loose a fiery series of phrases in a rare demonstration of the virtuosity that clearly underscores everything he does. But as the piece progressed, Henriksen began alternating between blowing notes that should have been far beneath the range of a trumpet and speaking in Norwegian—the audience laughing harder and harder until he finally drew the piece to a close to great applause. It was a remarkable demonstration of spontaneous invention, where two musicians with a clear affection for one another, managed to bridge the gap that exists all-too-often between performer and audience in such freely improvised contexts.

ADVERTISEMENT
With three albums under its belt for ECM—Soul of Things (2002), Suspended Night (2004), and Lontano (2006)—it was inevitable that Polish trumpeter Tomasz Stańko's quartet, featuring pianist Marcin Wasilewski, bassist Slawomir Kurkiewicz and drummer Michal Miskiewicz, should have run its course—at least for the label. With the exception of Keith Jarrett's Standards Trio, there are few, if any, artists who have released more than three albums with the same line-up; a signal, perhaps, of label head/primary producer Manfred Eicher's restless pursuit of something new.

What's most encouraging about Stańko's new quintet, featuring a mix of Danish and Finnish musicians, is that he's continuing to mentor younger players at a time when that longstanding tradition continues to be on the wane. With a forthcoming release, currently titled Dark Eyes (but still subject to change), the Tomasz Stańko Quintet's performance at the Alexandra was one of its first since recording the album this past April in France and, while there were clear indicators of a group still finding its feet, its promise was abundantly clear from the first tune, a fiery modal workout that provided an early feature for Finnish pianist Alexi Tuomarila.

Tuomarila continued to be one of the quintet's most impressive members throughout the 100-minute set, along with fellow Finn, drummer Olavi Louhivuori, who was a flexible player equally capable of creating broad colors and delicate textures, in addition to creating powerful pulses where time was often as much implied as it was discretely delivered. Still on the shy side of 30, Louhivuori was also a potent soloist, especially towards the end of a set of all new, unannounced compositions that were unequivocally Stańko's, when he entered into a blazing exchange with the trumpeter. Stańko may have left the vast majority of the solo space to his younger band mates, but he still proved capable of delivering serpentine melodies and unmistakably rich solos with his immediately recognizable, raspy tone.

Danish guitarist Jakob Bro is, perhaps, the most well-known of Stańko's new bunch, not only for his own records, including the impressive The Stars are All New Songs Vol. 1 (Loveland, 2008), but for his membership in drummer Paul Motian's Band, heard on Garden of Eden (ECM, 2006). Still, while Bro warmed up over the course of the performance, delivering two particularly strong solos that were filled with curious horizontal intervallic jumps and a particularly sensitive expression, especially on the Latin-tinged closer that ended the set, he had previously appeared somewhat tentative. Still, this is an early gig and there's no doubt that Bro, along with the rest of the group, will gain confidence and strength as time goes on.

Fellow Dane, bassist Anders Christensen, is perhaps the most unusual choice for the group—playing, as he does, a fretted Fender electric bass rather than double-bass, which he also plays. Still, as another Motian alum from the drummer's Electric Bebop Band around the turn of the decade, he's by no means an unseasoned player, just one whose appearance—styled hair, tight jeans and "Legalize LA: Immigration Reform Now" T-shirt—seemed more suited to indie rock rather than a jazz group that ranged from abstract impressionism to moments of simmering energy. Still, he created a rock-solid foundation for the rest of the group—essential, really, especially because of Louhivuori's more expressionist tendencies—and delivered a number of short but intriguing solos of his own, channeling a bit of Steve Swallow but with a less expansive vernacular.

Stańko's writing continues to be distinctive, a combination of rubato tone poems and more outgoing compositions that provided the trumpeter ample opportunity to demonstrate his piercing upper register and growling lower end. As distinctly lyrical as ever, what's most evident about Stańko, given it's been three years since his last release for ECM, is that it really doesn't matter who's playing his music as long as they're good (which this quintet certainly is). No matter what the context, Stańko's voice- -both compositional and in performance—remains abundantly clear and identifiable, and if his quintet's performance at Alexandra was any indication—warts and all—his forthcoming album is going to be another winner.