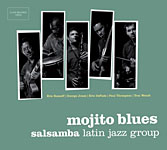 Salsamba is a Pittsburgh-based quintet that has 25 years under its members' collective belts, and the musical familiarity makes it incredibly tight, both rhythmically and melodically. Mojito Blues, showcases their Latin jazz roots along with the band's accomplished musicality. Whether it's the quintet's original compositions or its reworking of Jazz standards, Salsamba excels at upbeat Latin grooves as well as traditional ballads.

The album jumps off with two festive numbers: "Have You Met George Jones," a reinvention of the standard "Have You Met Miss Jones," and "Mojito Blues," a funky, riff-oriented tune. Both songs were written by band leader and guitarist, Eric Susoeff, and are great examples of the balance Salsamba achieves between the rhythm section and the melody instruments. Conga player George Jones, drummer Thomas Wendt, and bassist Paul Thompson never overwhelm the melody, but are always right up front with it. They also develop a lively interplay with each other, creating drive without stepping on each others' rhythmic toes. This is the heart of Salsamba's sound, with the rhythm functioning as a single instrument.

With such a tight ensemble behind them, Susoeff and saxophonist/flutist Eric DeFade have a solid foundation to explore their improvisational interests, displaying both technical mastery and a varied sense of melodic adventure. Especially pleasing are their harmonized lines that then take off into individual solos. On "Jive Cha Cha" (a reworking of the Nat Adderley tune "Jive Samba"), DeFade's solo moves from a warm resonance to a sharper, projecting tone as his solo intensifies, a trait he displays throughout the album. And he further impresses when he picks up the flute on "Noturna," where he displays a sweeter, melodic side. No matter what the instrument, DeFade serves up an earful of wonderful playing.

Susoeff is a skilled guitarist who can move effortlessly from vibrant Latin hooks to John Scofield-esque lines on the original, "Hindsight,"and Wayne Shorter's "Fee-Fi-Fo-Fum." The guitarist's playing is marvelously fluid and accessible, giving nods to different stylistic touchstones (a bit of funk here, a Latin line there, a bluesy turnaround over there) while not being hemmed in by them. His accompaniment is first-rate—harmonically supportive with just enough syncopation to keep the drive going.

Mojito Blues is a lively album that's full of charming tunes and excellent musicianship; it's almost deceptively easy on the ears. Each listening bears new, interesting nuances whether it's from Salsamba's outstanding rhythm section, its adept soloists or the sparkling arrangements.