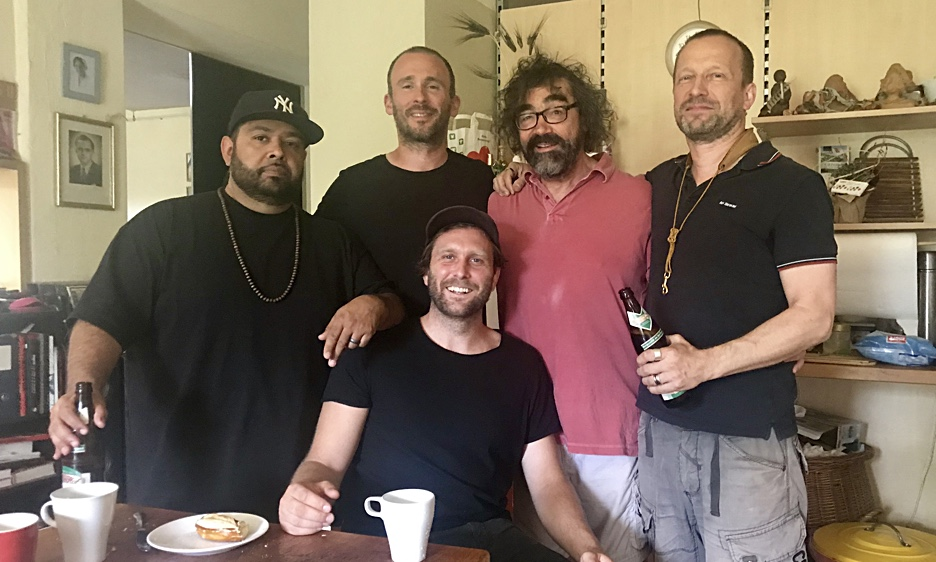 By MARTIN LONGLEY
May 11, 2019
Sign in to view read count
Anguish are born to be in Moers. This supergroup of the underbelly bleeds together from varying times, diverse sonic areas and different lands. Alternative New Jersey hip-hop roams into the realms of vintage Krautrock, causing distress during an inbreeding feast with the masters of free-Viking jazz. Two pairs of players apiece from Dälek and Fire! meet a founding Faust-father. Then they record for one of the finest jazz-adventuring labels, RareNoise, run by Italians in London.

Anguish made an album called Anguish, its cover striking unquiet via its coiled, exposed serpent brain, nesting within a side-viewed skull. The aural insides are also extremely affecting, seething with squall, blasted by noise textures, loaded with wordy rap-rhymes and featuring contributions that are not necessarily audibly attributable to its makers. These highly individual artists become a composite, collaborative, sick mind, dedicated to avant noise-hop, darkness pervading throughout, acting as a suitable soundtrack to now.

Anguish will make their live performance debut at the Moers Festival, in Germany, not far from Cologne. It will be the first time they've assembled since the album recording sessions. Your scribe met up with MC Dälek, also known as Will Brooks, at a table on the sunny parklet that looks across at NYC's Lincoln Center complex. This is where Anguish should also be welcome, sometime soon, perhaps during this arts hub's Out Of Doors summer music festival.

Brooks is wearing shades, but this doesn't hide his sincerity, or his enthusiasm for Anguish. "Trying to set shows has kinda been like wrangling cats," he muses. "With all the bands, the projects that people are working on, schedules. It's difficult to coordinate. So when there's one that can happen, we're out to make it happen."

There's a Dälek gig in Austin, Texas, just two days before the Moers appearance of Anguish, but Brooks really wanted to make it, when he heard that his bandmates could all intersect at this innovative festival. "I trust those brothers with my life," he states. "Everyone knows what they're doing, especially the Fire! side of the equation..! They live and breathe improvisation, so we're in good hands. And Joachim as the spiritual centre, I think we're good, y'know...!"

Dälek had already worked with Hans Joachim Irmler on their 2004 collaboration with Faust, of whom the keyboardist was a founder member. They had long been set on replenishing that artistic flow, although taking several years to coincide in suitable fashion. Eventually, Dälek returned to Irmler's studio, bent on hanging out. "I hadn't been there since it had been completed and functional," says Brooks. "There was a whole other session that we recorded, that was more of a preliminary, testing the water, and not really knowing that a year later, when we were scheduling a tour in Europe, we would be starting to brainstorm with Joachim."

Dälek had name-dropped Faust in one of their early songs, and word got back to the band, via their booking agent. Soon, that 2004 recording collaboration was activated, with Irmler and fellow founder-drummer Zappi. "We've had a relationship with them for a long time now," says Brooks. "That era was heavy, man. They were creating some brand new stuff that was really good to hear, and to be a part of...Joachim played me stuff that he's been working on in recent years, and it's really beautiful, a lot of solo synthesiser or organ stuff. There's one hand-built synth that he's had since the '70s. He's pretty minimal. It's more what he plays, and how he plays it..."

Even though the Anguish album is riddled with effects, most of what Irmler contributes is a direct product of his keyboards, more naturally individualist. The final track, "Wümme," namechecks Faust's birthplace town, deliberately evoking a Krautrock sound.

For around a decade previously, there had also been talk of working together with saxophonist Mats Gustafsson (he of Fire! and The Thing), but nothing had ever lined up correctly. One request that Gustafsson had made was that he wanted Fire!'s Andreas Werliin in as drummer, so suddenly there were the makings of a band line-up in place.

Brooks recalls a gig at The Knitting Factory, in the venue's old Leonard Street location in lower Manhattan, where Dälek played with drummer William Hooker, registering their early interest in free improvisation. He smiles when acknowledging that Antipop Consortium beat Dälek to recording such a crossover project when they released a collaborative album with pianist Matthew Shipp in 2003. He also observes that Dälek have long maintained an equal attraction towards drone and noise explorations. All of these zones are, of course, writhe-ingly crossbred down in the Anguish snakepit.

Brooks continues: "Mats had the contact with RareNoise, and asked them if they'd be interested in funding the project. It all came together. The recording took two or three days, tops, with overdubs. Most of it was done in two nights, and mixed while we were still there, so it was a total of six days in the studio."

Indeed, the RareNoise label support was there before Anguish had even started recording any music, wisely based around the sheer excitement of the conceptual contents. "There was definitely a little bit of pressure, but good pressure."

It was the kind of pressure that gets things done.

"The funny thing about the album is that we had the name, and we had the artwork, before we had anything else. Now we had to make this into a real thing," he laughs. "The artist, Darla Jackson [from Philadelphia], when I saw a photograph of her sculpture, I thought, that's the album artwork!, and the first word that came to my mind was 'anguish.'"

In between two halves of a European tour, Brooks and guitarist Mike Mare had set aside a week for visiting Irmler's studio, to lay down this prospective album. "Most of it was written the week before we got there, in the van. I had these pieces that I knew I wanted in there, but I wasn't really sure if they were gonna work, or how I would make them work. Everything that I wrote ended up being used."

When asked about the Anguish method, Brooks believes that they have the strength and confidence of complete free-form improvisation, although with a certain amount of prepared content. "It's the sum of the parts. I don't think that it's one player's solo that makes the song. It's the combined parts that make the song what it is, and I tried to maintain that, even with the vocals. The lyrics are just a part of the whole composition, rather than being upfront, and the main focus of the album."

There was one particular number that held a high degree of inspirational happenstance. "Healer's Lament" uses a poem by the Californian wordslinger Kamau Daáood, which Brooks had captured on his cellphone, only a few days earlier, whilst leafing through an old skool tome. "One of the nights when we were recording, after extensive drinking, I thought that I was done recording vocals. I thought that we were just listening back, hanging out and enjoying it, and that track that ended up being Healer's Lament came on, and I was, like, yo, I got these poems by this guy Daáood, and maybe they'd work on here, but I was, like, if I do it, I gotta do it tomorrow. I'm way too drunk to record anything right now, and Mike insisted, like now, now, now! Record it now! And I was, like, oh no, man, I can't even focus my eyes, man. So I got on the mic, bottle of whiskey in my hand, phone with pictures of the lyrics, and somehow made it through the poem, and it fit perfectly with the song, which was already set. There was no editing, it sounds like those lyrics belong on there. It was one of those happy moments in the studio where everything just lines up beautifully. It's probably one of my favourite moments on the album. I'm grateful to Mister Daáood for the words, and I hope I did them justice."

Your scribe enquires what the hell they all have planned for the Moers Festival set...

"All the parts that we bring are very visible, but they all mesh together to create more than just the parts. There's a handful of what ended up becoming songs for the album, that we want to play in the way that we played them. How accurately, I don't know, but "Gut Feeling" is one that I really want to play the way it is. That being said, I feel like there's room there to extend, change. We're going in with the idea of a loose set-list. These are the songs we wanna hit, in this kind of order, but how they happen, or manifest themselves, we're leaving open."

It sounds like Brooks is eager to create the freedom situation of the original recording sessions: "We came in with these general ideas, and played for the room, and we all just vibed off of the sound, and if we dug it, just started playing around it, and building on it. That was the extent of the planning for the album. I want to maintain that for the live show, and see what we can build. If it ends up sounding completely different, I think that's fine too..!"