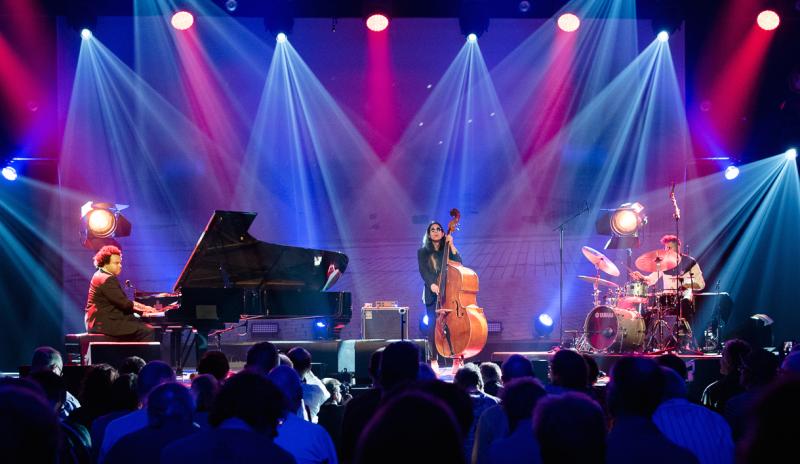 By PHILLIP WOOLEVER
July 8, 2017
Sign in to view read count

We want to keep the ‘idea behind Moers’, and to set off in search of the unheard and the unexpected, like it used to be. —Tim Isfort

Most questions and concerns regarding the present or future state of the Moers Festival could probably be answered just a few steps inside the staging grounds by looking at the smiling swarms.

At the same time last year, such a scenario was much farther from reality. After a doubtful political environment in 2016 led to funding insecurities and subsequent major personnel changes, there was rampant speculation that the Moers affair would be greatly diminished, if not nearly eliminated.

After this year's event, nothing seemed further from the truth as lot of people obviously found their bliss, whether that Deutschland Dharma was inside the capacity filled festival hall or amidst the surrounding trees and merchandise outside.

The enchanting park around the festival locale was a vibrant reminder that even after internal shakeups and financial issues, Moers is still going strong. Whether that's from a new direction or old inertia there was a very positive vibe that seemed apparent to all, as thousands of ecstatic attendees basked in various stages of glow during varying levels of performance. Moers' basic sound system and lighting was first class, while acoustics were good but not flawless for an eclectic range of acts and locations.

A new operational team headed by Artistic Director Tim Isfort and Business Manager Claus Arndt had to be satisfied with their results, at least those based on attendance, sponsorship and the concerts.

Beside an abundance of homegrown artists there was popular, internationally recognized talent like The Bad Plus, Anthony Braxton's sextet, Swans and Brian Blade's Mama Rosa Project.

"The first days felt like a trip through a worm hole," reflected Isfort. "The festival had been in hibernation basically. We had to work our way back to reality. We want to keep the 'idea behind Moers,' and to set off in search of the unheard and the unexpected, like it used to be. In doing so we're attempting to strike a balance between artistic quality on an international level when it comes to the music, and strengthening the festival's roots in the city at the same time."

Apparently, a large number of people simply attended to roam the festival grounds or wander through the adjacent park that glowed so green it seemed like Oz.

A "California Dreaming" type hippie aesthetic was apparently quite alive and well. Cordially colorful characters and groups of kids wandered about the trees, as families and freaks mixed for a mellow vibe.

There was plenty of free music, both on the grounds and in the historic medieval commercial district a kilometer or two away. It looked like much of the town got involved in way or another.

Even the schedule is offbeat at Moers, with starting times like 2:04 or 6:37 listed. Most of the time the oddballs score sensationally, but there are also misfires.

For some attendees, that was the case this year with the highly ballyhooed experimental band Swans. Minimalism from Philip Glass or Brian Eno usually makes sense. Swans may only have been making noise. That said, it would seem that whatever your tastes, there is something for everyone at Moers and it is decidedly not standard fare.

On Monday's climactic agenda, the festival hall's first performer was Dorian Wood, a multi-talented singer and pianist from the Los Angeles area. After a solo performance Sunday night, Wood put on a clinic in stage presence during his set with Ensemble CRUSH, a multi-national, chamber type group featuring electronically enhanced cello, viola, violin, clarinet and accordion.

The artistic pairing was a very good fit as Wood tapped some of his Latin background and played deeply from the heart for a festival highlight. The ensemble did a fine job responding with a classical based, foundational soundscape.

Deceptively subdued tension in the strings built to operatic bursts. Wood displayed his powerful voice during arrangements of traditional songs like "La Cara Infinta" and kept many entranced with his subdued baritone, singing in Spanish. Wood is an off-beat character who remains intelligent and engaging while taking risks in his repertoire. After his performance, Wood provided solid insight on what usually works, but sometimes doesn't, in a creative environment like Moers.

"Sometimes it seems like artists are entertaining themselves," said Wood, quite accurately. "I worked in free jazz where some bands' attitude was 'fuck the audience.' To me, something essential is nurturing the audience, because none of this is possible without them. Connecting with the people is what makes a moment breath forever."

Wood definitely made that connection, as evidenced by new fans that approached him for the rest of the afternoon. Anyone looking for an original talent should look his direction.

Next up was Cocaine Piss, a raging punk foursome from Belgium, featuring Denmark's Mette Rasmussen as a guest on sax. They were very good and very loud. Masterful staging put the group, who had never performed together; on a platform placing them at crowd center in longitude, latitude and sightline altitude. Personal elevations were likely varied.

Rasmussen's alto wailed like that of James Chance with the Contortions decades ago during New York's brief "no-wave" era, but in a much heavier mode. Chords were torn asunder then lost in megaton madness amidst searing, subterranean bass tones.

It was cool to observe a wide-ranging, typical Moers crowd in which hundreds of older fans watched stoically or nodded along as vocalist Aurelie Poppins screamed hysterically. Many people winced, but many more grinned and roared back like it was primal scream therapy. The set was an excellent edge to any spectrum.

The balance and contrast between the Piss and the performance that followed was a prime example of the diverse, co-existent polarity to be found at Moers.

Saxophonist Ingrid Laubrock has garnished many accolades for her adventurous compositions since leaving native Germany decades ago for London, then New York. Moers marked another heartfelt return to the homeland. Laubrock was Moers' Improvisor in Residence during 2012, and today she was greeted very appreciatively by a full house.

It sounded as if there was more actual music-based activity going on in the first minute of Laubrock's first piece than during the first twenty minutes of Swans set, on the same stage a couple nights before.

That's not to say everything worked perfectly.

In addition to trumpeter Nate Wooley, pianist Kris Davis, guitarist Mary Halverson and five singers, the packed stage was shared by the 31-piece Cologne EOS Chamber Orchestra, the five member Cologne Vocal Soloists Group and a pair of rotating conductors. There were times it became a case of the parts being greater than the sum.

Laubrock's spotlight consisted of two creations. She did not play during the first, "Vogelfrei," inspired by old photographs she took of electrical contact lines at a German railroad station.

At times the piece ran off track. Introductory orchestrations were intriguing, but then they stalled. Laubrock's sax seemed to cry out for her from its stand during some passages but she remained an observer in the audience. That sax and a clarinet stayed propped up and untouched next to the piano, like abandoned but noticeable mini-monoliths. We'll take something with a little more juice like the previous piss, please.

Some excruciating stretches passed before Laubrock took the stage for her second effort, "Contemporary Chaos Practices," commissioned especially for this year's festival. Themes flowed much better after she sat down with her horn and helped make matters more interesting.

Still, there were moments when the switching conductors and gigantic ensemble looked pretentious. It's a bit difficult to imagine how and why something sounding pretty much like an elongated ending to The Beatles "A Day in the Life" required so much deliberation and guidance. The funny thing was that prior to a short solo, at times Laubrock played pretty much the same stuff as Ms. Rasmussen had an hour before.

There was some fine interaction between Laubrock's sax and Wooley's trumpet but there was also too much ostensible sounding filler, which begged the question as to what might happen if you just had the orchestra play blindfolded and randomly.

Any final call comes down to the listener however, and from considerable cheering one must conclude that overall, the audience definitely approved of Laubrock's vision.

The following quartet of four Brooklyn saxophonists, dubbed Battle Trance, did not enjoy the same benefit of doubts from many folks who abandoned their seats early in the set. It was hard to blame them.

The show began with more than a moment of silence as the players stood motionless with their eyes closed. Experimentally, it might really have been special if they stayed that way for the set's entire duration. Their start was good, as initial notes sounded like bagpipes heralding imminent chaos, but after just a couple minutes a mass desertion began.

Some interesting choral type moments followed, and the Battle Trance concept is actually pretty neat, but things got old too fast. Segments got more entertaining with vocal grunts as the spit started to fly during weird wind tunnel portions, but sometimes repetition is merely repetition.

If viewed as a challenge of what musicians can come up with under a specifically limited format, the band gets a shopworn "A" for effort. As a performance, things are different. Battle Trance deserves credit for taking creative chances, but their cumulative results were hard to embrace.

After opening with George Gershwin's "I Got Rhythm," Lewis declared "I can't wait to play some scary stuff, but we have to start mellow." Whether mellow or wild the trio were right on key as they traded righteous riffs during crowd pleasing songs like "Inner Urge" by Joe Henderson and brought back a much needed musical reality.

There was just bit of schmaltz, but that was totally forgivable after other excesses of the day. When a floating space woman broke into a celebratory, Woodstock type dance near the stage everything finally seemed back in proper condition at Moers. The solo "Heartbeats" and Lewis's original "Thanksgiving" highlighted his skills with the keys and the crowd. "Jamaican Girl" added upbeat romance.

Ultimately, saxophonist Pavel Arakelian joined in the finale as improvisational icing on ELEW's tasty chord cake. Almost everyone in the festival hall departed with a smile.

Outside, clouds gathered for a beautiful sunset as visitors, vendors and vagabonds packed up until next year. While local finances or politics each have admittedly unpredictable, highly combustible elements that may arise, for now Moers looks to be in great shape once again.

The Woodstock girl had extremely good cause to dance. Thank the musical heavens for all those artists and patrons who continue to make such things possible.