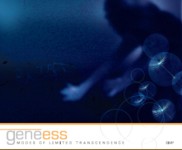 An award-winning guitarist and vital part of the music scene in New York city since moving there in 1991, Gene Ess continues his exploration of music with another dose of tasteful modern jazz featuring sophisticated and engaging compositions on Modes of Limited Transcendence. A classically-trained pianist, Ess also plays the electric guitar and is often compared to John Scofield and John Abercrombie in style. Once considered a child prodigy, Ess draws on pop, jazz, and classical influences when composing his music—though with this recording it's all modern, mainstream material. A man with a social conscience and a forum to express his feelings, Ess dedicates the album "to all who strive to transform the "horrors of humanity" and to live a heroic and magical life."

The eight compositions on this disc are his attempt to influence all who hear the music to embark on a journey of their own and discover a piece of humanity. Accordingly, some of the music may sound a bit melancholic but nevertheless manages to touch an emotional chord. "Art of Nothingness" is such a tune, its soft texture and the inviting tone of Ess' guitar makes for a relaxing introspective number that is quite enjoyable though a tad lengthy at over 12 minutes. On "Discovery in Three," another light and intricate number, Ess delivers one of his best performances and shares the space with pianist Tigran Hamasyan and legendary bassist Harvie S.

All of the pieces here are not cushy or mellow by any means as the opening "Ryo's First Flight" reveals. It is a piece in which the guitarist and band take off on a spirited romp through modern jazz. The third track, "Trance Chant," begins in a jazz/rock fashion and then settles down to a more jazzy groove with Hamasyan dancing on the keyboards. Ess touches upon his Japanese heritage on "Gagaku Dreams," which means "elegant music" referring to the Japanese classical music performed in the royal court. Given the title, the music is somewhat unexpected and sounds a little free-stylish.

Ess displays flashes of brilliance with his performance on the guitar, but it's not his musicianship that makes this disc enticing as much as it is the quality of his writing. There are currently many jazz guitarists with new releases entering the market these days, and Modes of Limited Transcendence, propelled by a talent-rich musician with a heart, transcends most of them.