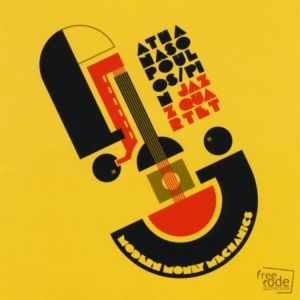 Guitarist Marcos Pin and saxophonist Thanos Athanasopoulos show their passion for jazz and social consciousness in Modern Money Mechanics, their second release on the Spanish-based Freecode label. To paraphrase Dicken's famous novel, this release might be dubbed a A Tale of Many Cities, as its diversity juxtaposes jazz's roots and modernism.

Highly accomplished artists who met years ago at a music conservatory in Holland, Pin and Athanasopoulos formed the quartet with drummer LAR Legido and bassist/Free Code founder Paco Charlin. Their influences are exhibited from the onset of "Ken Saro Wiwa," an exhilarating track dedicated to the slain Nigerian environmental activist. It's a nice segue to the Afro-centric beat of "Don't Drink the Blackwater," a tongue-in-cheek reference to the corporate and private funding of weapons. Equally persuasive compositions include the effervescent "Fragment," dedicated to the great Charlie Parker and Pin's "She Wakes Up and Smiles," as his masterful chords work harmoniously with Athanasopoulos' Dexter Gordon-like tonality.

The three abstract pieces—the title track, "Unlike A Rolling Stone" and "Banker's Suite (Burned Nicely...)" are fascinating, exploratory gems which are far too brief; whereas Pin's "Waltz For Melina" gives everyone ample room to bask in its warm glow. Another highlight is "Bagheera's Dilemma" which morphs between a hip Middle Eastern tempo and cool swing. Like a spark to gasoline, "Gordon's Bleu" is combustible; the band swings with much energy as if Dexter Gordon himself was in the studio. This amalgam of styles might dissuade some, but the crux of the matter is heard in the group's flawless performances and compositional savvy.