By DEREK TAYLOR
August 1, 2001
Sign in to view read count 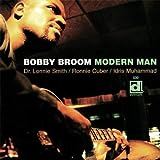 Call it what you want, Soul Jazz, Organ Jazz, whatever, but the brand of music birthed by the B-3 explosion of the 1960s is alive and well in the third millennium. Blue Note’s new banner reads “One Label Under a Groove” and groups like Medeski, Martin and Wood, and Soulive continue the extract marketable material from the legacy left by such legends as Jimmy Smith, Jack McDuff, Jimmy McGriff. With all press and popularity surrounding this fresh wave of groove-centric bands players who predate their success are often swept over. Guitarist Bobby Broom and his partners on this recent Delmark date, definitely fall into this category of overlooked artisans.

Broom’s been actively gigging for over two decades and served as sideman to the likes of Sonny Rollins, Miles Davis and Art Blakey over the years. His fluid picking style and mild amplification references such 60s stalwarts as Thornel Schwartz and George Benson. Dr. Smith, also known under the tongue-in-cheek sobriquet of The Turbanator, shows a level of restraint that negates the hurricane histrionics suggested by his nickname. Dealing in easy swirling fills and well-oiled accents, his light touch at the keyboard fits smoothly into the leader’s relaxed musical framework. Muhammad, once known as one of the funkiest drummers on the scene also plays things cool, never resorting to heavy-sticked bombast and instead covering the rhythmic range with taste and discretion. Ronnie Cuber, a baritonist who believes in the merits of both brawn and balladry, interestingly got his start in Smith's employ during the late 60s at the apex of the original organ jazz craze. Live at the Club Mozambique, an album they cut for Blue Note, is an excellent example of their early fireworks.

The skill and restraint shown by each man makes the prospect of lumping the quartet alongside the current crop groove purveyors appear an unfair enterprise. Seasoning their music with subtle underlying syncopations their sounds are more aligned with swinging post-bop than the greasy funk favored by their peers. The grooves aren’t thick and pasty, but instead porous and enveloping. The band’s reworking of the Stevie Wonder classic “Superstition” is a fitting microcosm of their esthetic. Gone are the fat and funky electric piano beats of Stevie’s original version. In their place is a lubricious distillation of the theme forwarded by Cuber and Broom in unison above a bustling, bopish rhythm. Ballads like “Ponta Grossa” and “I’ll Never Fall In Love Again,” while taken at slower tempos and often imbued with a softer sheen still maintain a steep level of musicianship.

Where the disc slips a few notches is in the chosen material. Given the reputations and past work of the players there’s a surprising amount of caution on hand in the arrangements. While pleasant several, such as the set ending “Layla” seem slightly divorced from the fire and weight this band is so obviously capable of stoking. Still, compared to most of what passes for organ jazz these days the program has enough sparks to make it worth investigation. More importantly may it serve as the catalyst to raise awareness of these players above and beyond the core audience that are already hip to their substantial and satisfying grooves.