By ELLIOTT SIMON
November 5, 2003
Sign in to view read count

During its final years, 1957-1960, a significant Music Inn innovation was their School of Jazz.

...in our desire for beauty in all things we are open, and one in our search for that little city of gold where the flute-player never wearies, and the spring never fades, and the oracle is not silent, that little city which is the house of art, and where, with all the Music of the Spheres, and the laughter of the gods, Art waits for her worshippers-Oscar Wilde 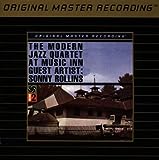 In 1950, while Senator McCarthy spearheaded his anti-artistic witch hunts, NYC residents Philip and Stephanie Barber moved to rural Western Massachusetts. Once there, with the help of friends like Alan Lomax, Langston Hughes, and Professor Marshall Stearns, they created what was to become a haven for jazz and folk musicians; the Music Inn. In the early '50s, live jazz was, for the most part, relegated to small clubs and the music was not subject to serious academic study. The Music Inn helped to change all that by offering a scholarly jazz & folk environment that hosted yearly roundtables where the roots of American Music were discussed, and jam sessions featured the finest musicians.

Filmmaker and founder of the non-profit organization Projectile Arts, Casey Meade, has joined forces with veteran producer Ben Barenholtz to create a comprehensive look at the significance of the Music Inn. Casey hopes this project, that has the full cooperation of Stephanie Barber, will finally give the Music Inn its historical due. "The knowledge of the Music Inn has fallen out of the present consciousness. I think a lot of people are going to be very surprised and interested. It was a very important destination (for jazz & folk musicians alike) at the time and was important in the historical development of the music."

During its final years, 1957-1960, a significant Music Inn innovation was their School of Jazz. Showcasing the Modern Jazz Quartet (MJQ) as group-in-residence and its leader John Lewis as artistic director, the school's curriculum allowed "students" to develop in an environment that fostered experimentation and creativity. The faculty list is a who's who of '50s and '60s jazz as George Schuller, one of the film's co-producers and a NYC musician himself notes, "John Lewis said, why not get Max Roach, Oscar Peterson, Lennie Tristano and Jimmy Giuffre to teach the students performance. My father (Gunther Schuller, a co-founder of the so-called Third Stream along with Lewis) and Marshall Stearns taught a history class, Bill Russo taught arranging while George Russell was brought in to teach his theoretical analysis."

Several years ago, a particular LP in his father's collection first piqued George Schuller's interest in the Music Inn. "I knew about this one LP that existed, this privately issued LP, the recording of the 1959 School of Jazz benefit that included Ornette Coleman and Don Cherry'it always fascinated me as to why this recording surfaced in my father's collection. Where did it come from?" George found additional recordings from 1960 and realized that there had to be more to the Music Inn's history than this one LP. There are few commercially released recordings from the Music Inn, the two most notable being the MJQ with Jimmy Giuffre (Atlantic, 1956) and with Sonny Rollins (Atlantic, 1958). For the past three years George has been unearthing rare archival musical treasures. "I found recordings'of the ensemble that Ornette Coleman was involved in that no one has ever heard. They [Coleman and Cherry] spent the summer of 1959 (as students) at the School of Jazz'and then they shocked the world."

The film will highlight Stephanie Barber's insightful recollections as presented through extensive interviews. Additional documentation including photos and footage will serve as the film's backdrop. Stephanie's stepson, Dr. Benjamin Barber, a distinguished, internationally renowned political theorist and author will narrate the film. During the next few months, many of the Music Inn's participants from the years 1951-1960 will be interviewed and a reunion of living faculty and students is in the works for later this year. Says Casey, "We are putting together an event this fall where we can actually have a kind of reunion of people who are still around. Since we began the project we have already lost two people (who had performed at the Music Inn): Babatunde Olatunji and Herbie Mann."

George maintains that, "These were incredible times for jazz music and its evolution. There were signs that things were about to change. You can even hear that at the '59 concert'a different kind of music was starting to evolve into other areas of improvisation." Parallel to the film project, there are plans for GM Recordings (Gunther Schuller's label) to release a CD box-set of performances from The School of Jazz circa 1958-60. Making this material accessible will provide additional historical insight into the development of jazz.

The influence of this spirit of scholarship and discovery on burgeoning musicians can't be underestimated. Casey tells how pianist Randy Weston's life was changed at the Music Inn. "He [Weston] came up there to get out of the city. He settled in the Berkshires and played cocktail piano at a nearby restaurant. Needing an extra job, he found one as a breakfast cook at the Music Inn and became an avid participant performing there several times." Weston, who has written compositions inspired by his times at the Music Inn including "Berkshire Blues," continues to be in touch with Stephanie Barber and will be an active participant in the film.

Although the archival collection of recordings is extensive, both Casey and George feel that other film footage and recordings exist. They are particularly interested in hearing from individuals who might offer this type of material to be included in the film. Those wishing to share Music Inn material or memories with either Casey Meade or George Schuller can contact them through Projectile Arts Inc. at [email protected] or by phone at 718-349-6444. For further information, visit the projectilearts website at www.projectilearts.org .