By EDWARD BLANCO
January 30, 2013
Sign in to view read count 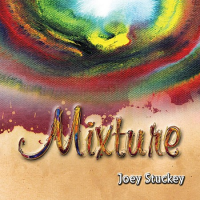 Offering a dynamic repertoire of rich melodic tunes from the light portion of the jazz spectrum, Mixture is a gem of smooth-styled jazz that sparkles all over. The first full-length jazz album from award-winning guitarist Joey Stuckey, an educator, radio and TV personality, among other things, the album presents a versatile set of primarily warm tunes with a touch of bop and pep. Stuckey's style has been compared to that of Jeff Beck, but with a slight southern approach.

Key to this endeavor is friend, keyboardist and songwriter Tom Rule with whom Stuckey has collaborated the past several years, writing the music for this album. The title represents the blending of their collective efforts and differing musical styles. The opening "We'll See" gives little clue to the main light theme of the recording due to the leader's rock-like riffs and fusion-tinged nature this buoyant piece. The real soft texture of the music does not truly begin until "Windows Down," with the beautiful "Sunday Brunch," "Give Five" and haunting "Raining" providing the meat of the program.

Not everything here is soft and sweet however, as stuck in the middle of these selections is the swinging, bop-to-the-core "Too Pooped To Bop." While much of the album is full of bright moments, two defining special highlights come on "Holly Tree Hopeful" and "Dot Dot Dot," both brief but beautiful statements. Stuckey ends somewhat as he began with "Crooked," a lively melodic closing number that possesses more of a bang than a whimper and, with the opening title track, serving as the perfect bookend to a sensational session of jazz.

Whether familiar with the blind guitarist or not, Mixture is a delightful recording, delivering an all-around pleasurable musical experience from an amazingly talented artist who, despite his physical limitation, navigates his musical path like a driven visionary, letting nothing get in the way of his success.