By MARK SABBATINI
November 14, 2006
Sign in to view read count 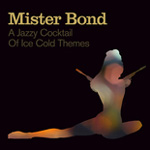 The new James Bond can't drive a stick shift, is indecisive about martinis, and plays poker instead of baccarat. If that sounds appealing, this is the album for you.

Mister Bond strips the rockin' energy of various familiar title tracks and rearranges them as sleepy smooth/Latin compositions lacking the musicmanship necessary to jolt them out of mediocrity. Some of the material borders on the kind of parody the album's self-warning title suggests, like Rick Washington's Motown vocals trying to channel the feminine longings of Carly Simon on "Nobody Does It Better."

The CD is scheduled for release when the 2006 version of Casino Royale debuts in theaters (advance buzz: blissfully primitive, brutal and gadget-free, despite the fears of those horrified at the casting of Daniel Craig). It's not like this album was predestined to impotency, as the concept has worked on other efforts. Saxophonist John Zorn did a killer free jazz reworking of the James Bond theme on Naked City. Fellow horn master David Sanborn kicked out a credible gospel/blues treatment of "Nobody Does It Better" on Pearls (thanks largely to the gutsy scattish vocals of Oleta Adams). The James Taylor Quartet gave an atonal shredding to "Goldfinger" on Acid Jazz Movie And TV Themes.

Mister Bond starts with a rearrangement of the original movie theme with a light Latin background that could have been generated by an expensive synthesizer; a wimpy guitar/flute/clarinet combo shares lead voicing duties. Some less-than-convincing horns play the bridge before returning to its shaky roots for the conclusion.

German R&B diva Cassandra Steen sounds like she got shot with a tranquilizer dart on the lagging Norah Jones-like folk/jazz of "The Living Daylights." Brazilian pop star Katia B doesn't fare much better on "Die Another Day." That's the problem in general—almost everything plods, a pace that's fine and even welcome between high-intensity cuts, but dulls the ears and sense of creative interpretation when it's the primary experience.

But get this many talented artists together and a few will get it right. "Afro-prussia" vocalist Pat Appleton does a winning funk/voodoo version of "Goldeneye" with a gritty Bond-girl voice and an energetic ensemble that playfully winks at the listener. She's less impressive, but still above most of the other Latin-tinged cuts, on a tamer "View To A Kill." Jutta Gückel matches the emotive and tonal qualities of Sheena Easton's original version of "For Your Eyes Only," with a syncopated acoustic guitar-heavy backdrop offering new edges for those familiar with the pop-ballad hit.

Many times an album like this is recommended for hardcore fans only, but purists who relish Bond for his seventy cigarettes a day and non-PC treatment of women aren't going to go for a lite adult contemporary dilution of his soundtrack. The collection isn't awful, merely uninspiring, sort of like the concept of watching 007 trying to save the world through diplomatic negotiations.

Dr. No Theme; View To A Kill; Goldeneye; License To Kill; Tomorrow Never Dies; For Your Eyes Only; Goldfinger; Die Another Day; The Living Daylights; Nobody Does It Better; The World Is Not Enough.