By IAN PATTERSON
December 29, 2006
Sign in to view read count 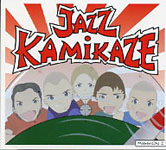 Jazz Kamikaze, yet another progressive group from Scandinavia, won the Young Nordic Jazz Comets award in 2005 and wasted no time at all in recording this memorable first album.

The group's very name, coupled with the cartoon-depiction of the musicians on the album's cover, implies perhaps an eccentricity and certain irreverence towards the jazz tradition, but this is only true in part. While their music shares some of the thumping energy and intensity of the English band Acoustic Ladyland or the Danish band Ibrahim Electric, Jazz Kamikaze is more steeped in the roots of jazz, as heard on the straight-ahead numbers "Sea Bridge and "Village Blues.

The lion's share of the compositions are penned by pianist Morten Schantz, but there is songwriting talent in depth in this band; the opening track by drummer Anton Eger, Vill Du Bli Munk? ("Do You Want To Be A Monk? ) is a song that once heard is difficult to forget, and allows tenor saxophonist Marius Neset to really show his chops, taking to the tune like a dog to a juicy bone.

The formidable electric guitar playing of Daniel Helov Davidsen steers the band into other dimensions, as on the most esoteric tune of the collection, Morten Schantz's "Well of Echoes. This number starts off with a slow piano funk riff, before quickly turning weirdly experimental and free-form, building to a heavy rock workout courtesy of some impressively unrestrained Davidsen soloing. And when Davidsen, and Neset on sax, really let go in unison, it is not so much kamikaze as controlled exhibition flying, and most exhilarating it is too.

The quality of the tunes, all of which have a memorable hook, is as impressive as the virtuoso musicianship. The songs have a very natural ebb and flow of intensity, heard perhaps to best effect on another Neset composition, "Snowscape. Slower numbers, like Schantz's wonderful "Under a Spell, show that this band is just as comfortable when cruising as when thundering at full throttle.

Another tune, "The Siege, made me think (in cartoon mode) that even the great twelfth century Arab leader, and nemesis of the Christian Crusaders, Salahuaddin, would never have broken down Jazz Kamikaze's defense. More likely, they would come screaming and kicking out of their fortress and leave their besiegers eating dust.

With a followup album due for release in a few months, it will be fascinating to see how this group's music has evolved. Were they however simply to serve up more of the same, it would be no bad thing at all.

Vill Du Bli Munk?; Rastapopoulos; Sea Bridge; Snowscape; Well of Echoes; Under a Spell; The Siege; Village Blues; Gina; Clowns of Doom Are Back in Town.