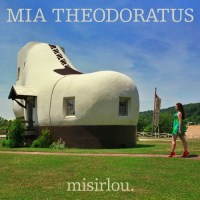 This is an exciting time to be an artist. The digital revolution is providing new tools daily and, at the same time, old forms have not completely disappeared, allowing artists who are so inclined to mix and match as they please. Harpist Mia Theodoratus's EP, Misirlou, is an intriguing mixture of old and new. To record the two tracks, Theodoratus did it old school, foregoing Pro Tools and instead setting up microphones and playing straight through. The EP is available as a vinyl record album, with the cover photography done on real film and untouched by Photoshop—but for those whose turntable is collecting dust in the attic, the EP is also available for download.

The music reflects this sensibility as well. Theodoratus has taken two songs with long histories and created them afresh. Although best known as surf songs, each tune has a unique backstory. "Misirlou" (Greek for "Egyptian girl") was first performed in 1927 by a Greek rebetiko group. Arranged as a jazz tune in 1941, The Beach Boys recorded it for its classic Surfin' USA (Capitol) in 1962 and, in 1994, surf guitarist Dick Dale's version popped up on the Pulp Fiction soundtrack. "Apache," which was inspired by the 1954 Western of the same name, was first recorded by The Shadows and became popular with many instrumental groups, while The Incredible Bongo Band's 1973 version later became a staple sample for rappers and hip hop groups.

ADVERTISEMENT
It's probably safe to say that no one has recorded these songs on harp, and the wonder is how well they translate. Theodoratus has created two pieces of uncommon beauty, full of grace and strength. Each tune is a cascading river of sound, with touches of dissonance that add intriguing accents. She is a powerful player, able to sing the strings with formidable energy, and yet she is able to drop back and display a sweet gentleness as well.

There's a reason these songs have been reinvented afresh by successive generations: the melodies are undeniably catchy, and in Theodoratus's talented hands, they become positively exquisite. In addition to providing lovely music, Theodoratus offers an example of how artists today can negotiate the new, without necessarily abandoning the old. It will be interesting to see what she does next.