Luke Paulo And The Grapefruit: Mirrors

By CHRIS MOSEY
September 20, 2014
Sign in to view read count 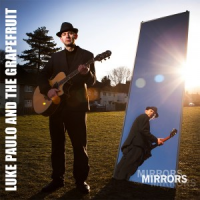 The lights dim. A figure steps onto the stage holding a guitar. He wears a dark suit and a fedora hat and sings his own melancholy lyrics in a deep, lugubrious voice.

Could it be...? Well, of course not. This is a small club in the vastly unhip English city of Reading, in turn part of the appropriately named county of Berkshire. Leonard Cohen wouldn't be seen dead in a place like this. But, as he turns 80—unlikely as it may seem—the Old Groaner appears to have given birth to what's known in the trade as a wannabe.

Luke Paulo doesn't mention Cohen in his publicity, though there is a video of him singing "Dance Me To The End Of Love." He describes his music as "jazzy" and "noirish." There's a faint connection to jazz through his Finnish pianist, Maija Tuomi- Nikula. As for it being "noirish," that's anybody's guess.

On this, his debut EP, Paulo sounds more like a cross between Noel Coward and Tom Waits than Cohen. The first song, "Clear Water" is really quite catchy, the sort of thing that might become a surprise hit. Although, in a line about the healing properties of clear water, Paulo stretches the word "heal" past all reasonable limits in a desperate bid to make it scan.

"Eyes At The Window" tackles a novel theme, the desire to live in someone else's body. Trouble is, after the initial statement that this is what he wants to do, there is very little follow-through.

"Crazy Like You" is similar. "All I ever dreamed about was to be crazy like you," Paulo sings then allows the idea to peter out. More work is needed on poetic content, if he's going to succeed in this line of work.

On the wistful, folksy "Hey Annie" he seems to confess his poetic limitations: "Hope you'll forgive me; just can't say what I mean."

Then, in the closing number, "A Summer That Lasts Forever," he gives a hint of greater things to come. The song deals with loss, its theme reminiscent of "Seems So Long Ago, Nancy," a song on Leonard Cohen's second album, Songs From A Room, Columbia, 1969.

But whereas the Bohemian heroine Nancy takes her own life—"A forty-five beside her head, an open telephone," Annie dies unglamorously of cancer. The epitaph on her tombstone reads, "Come and see me, when it's rainy weather. We'll kneel down and pray and we'll see our way to a summer that lasts forever."

It might not scan very cleverly but it's heartfelt and the imagery poignant.

Clear Water; Eyes At The Window; Beads On The Floor; Crazy Like You; Hey Annie; A Summer That Lasts Forever.

About Luke Paulo And The Grapefruit