By IAN PATTERSON
February 18, 2013
Sign in to view read count 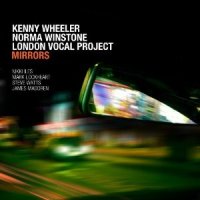 That trumpeter/flugelhornist/composer Kenny Wheeler is challenging himself at 80 is surely inspirational. Mirrors represents his first recording where poems provide the music's source, though he composed the music over 20 years ago. The project was then commissioned for five solo voices in 1998, but the combination of Wheeler, singer Norma Winstone and the London Vocal Project, led by Pete Churchill, brings a fluid, suite-like permanency and epic scale to the original concept. Poets Stevie Smith, Lewis Carroll and W.B. Yeats provide strikingly diverse imagery—surreal, visceral and profound—and Wheeler weaves it all together in a sumptuous melodic tapestry where the music of language is meaning enough.

The inimitable Winstone's strength and nuanced delivery belie her 70 years. Hers is a remarkable performance, though the balance struck between all the voices makes Mirrors a truly collaborative success. Bassist Steve Watts, drummer James Maddren and pianist Nikki Iles engender a swinging undercurrent, breezy and understated, that's irrevocably felt throughout. These musicians enjoy tremendous understanding; Winstone and Wheeler first recorded together in Azimuth in the 1970s and Iles, saxophonist Mark Lockheart, Watts and Maddren all play with Winstone in the group Printmakers. Little wonder, then, that the evident chemistry seems so effortless and joyfully intuitive.

The LVP's seven sopranos, eight altos, five tenors and five basses are the protagonists on three numbers. "Humpty Dumpty" is a playful take on Carroll's poem, with delightful passing around of the vocals between the choir sections. A deceptive intensity inhabits the mantra-like vocal rhythm of Smith's "The Broken Heart," a particularly hypnotic number punctuated by Wheeler's fine bluesy solo. Wheeler and Iles shine on a swinging arrangement of Smith's "Black March," though its buoyancy derives primarily from the snappy choral cadences.

Winstone's performance sets the jewel in the crown. Her dreamy, almost ethereal reading of Carroll's "Through the Looking Glass" is wonderfully sympathetic. A rootsy and mellifluous instrumental passage, driven by Wheeler and Lockheart, serves as an interlude before the choir restores the contemplative mood. Carroll's "Tweedledum" is similarly episodic; jaunty in the choral passages, intimate and spare when Winstone holds court, and swinging when the quintet steps up. The singer, Iles and Lockheart confer a gentle majesty on Smith's seemingly throwaway, four-line poem, "My Hat."

Winstone and Iles treat the ghostly subject matter of "The Deathly Child" with a palpable sense of wonder, though when Winstone sits out the ensemble refashions this harbinger-of-death tale into joyous celebration. The fatalistic view of humankind's condition in Smith's "Breughel" is similarly dressed in more soothing robes by a lovely Burt Bacharach-esque melody. "The Bereaved Swan" captures the contrasting elements of melancholy and lyricism in Smith's words, whereby the choir's graceful waves form a canvas for Wheeler and Lockheart's more emotionally urgent colors. The subdued rhythm of "My Soul" highlights the powerful lyric content, lent suitable poignancy by Winstone's pitch-perfect delivery.

How to categorize this glorious music, the ingenuity of Wheeler, Winstone and the LVP? To quote Smith: "Whatever names you give me, I am a breath of fresh air, a change for you." And what price Vol. 2—from James Joyce, via Robert Frost to John Cooper Clarke?

Humpty Dumpty; The Broken Heart; The Lover Mourns; Black March; Through the Looking Glass; The Hat; Breughel; Tweedledum; The Bereaved Swan; The Deathly Child; My soul.