By GLENN ASTARITA
November 6, 2007
Sign in to view read count 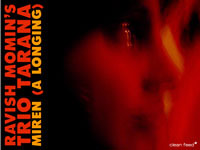 Drummer/percussionist Ravish Momin has bragging rights to this Middle and Far Eastern style of thrusting progressive jazz. Funny, because it seems so natural and untainted, as if it was meant to be. And he doesn't need a bassist, largely due to his booming bass drum sound and polyrhythmic articulations. This trio covers many musical vistas on Miren (A Longing). Complex, yet easily attainable, where jazz gets a makeover abetted by Sam Bardfeld's streaming violin phrasings and Brandon Terzic's multi-functional performances on oud.

Featuring the violinist's ostinato-based staccato lines and his band-mates' powerful three-way exchanges, the music crosses many genres while maintaining a scope nestled within good cheer. Ultimately, Momin is a mover and shaker as he navigates the band through North African modalities and Indo-folk themes—all executed with a cutting edge, no-looking-back mindset.

A good portion of these works are engineered with the soloists' circular voicings and budding motifs, spawning heated improvisational dialogs amid linearly designed unison choruses. On "Miren, Terzic's soaring lines ride atop the drummer's fractured backbeats, highlighting the trio's vast expressionism, as many of the passages contain rhythmically contrasting diversions, capped-off by the group's penchant for rendering Middle Eastern-oriented sub-themes.

Bardfeld's spiraling solo during "Fiza launches the band into extended thematic episodes, all kicked into high-gear by Momin's energized drum and percussion work. At times the musicians communicate mystical undercurrents, often counterbalanced with ominously crafted shifts in strategy. Momin literally has the beat on this stuff; in simple terms, he's in a class of his own.